Saturday, July 28th started out much like any other crazy, task-involved, to-do-list-requiring weekend. We knocked our bi-weekly house cleaning chores off our to-do list early Saturday morning and set out to enjoy the rest of our weekend starting with a day trip up to Battleship Rock in Jemez Springs, New Mexico, a spot we had only been to when we initially started dating.

When Bryce and I first met, we had our first official date on April 1, 2011 at a nice restaurant in Old Town Albuquerque called Antiquity. Although both of us felt very sleep-deprived from an amazing PG-13 rated first date that ended with an eskimo kiss (due to the fact that we awkwardly bumped noses rather than kissing) and a rejected offer to spend the night at my apartment (complete with a new toothbrush), the next day Bryce suggested an upbeat second date to Battleship Rock where we could hike our zombie butts to the hot springs with all three of our pups in tow.

We found a crystal clear spring to sit next to that day where we shared cheese, crackers, and wine and enjoyed playing with the pups and their ball until they were as pooped as could be. Although this was the spot where our romance first unravelled (despite the fact that I supposedly refused to kiss Bryce again that day), we never took a trip back there for our anniversary one year later.

Remembering that we had not been to it in over a year, that Friday before the weekend, I had made a suggestion that we go back to this spot.

While I was still finishing a few last chores around the house on Saturday, Bryce offered to get sandwich meat for our hike later. Instead of running this quick errand he came back two hours later in what I would like to call a “Miranda errand” — because only I say that I’m going out for something real quick and come back several hours and errands later, hauling in several shopping bags (usually Target and Petsmart).

I suspected something was up when I asked him where he had gone for two hours and he nonchalantly replied “an errand.” Bryce also seemed to be in an awfully cheerful mood for someone who had just spent two hours purchasing deli meat. But onward we continued onto our day trip without any further questions!

On the hike up to the springs Bryce stopped to drink once and seemed to be in a gushy mood, confessing to me how he couldn’t imagine spending the rest of his life with anyone else and how he really loved everything about me and we were such a good match.

During another instance on our hike, he stated that he simply could not be with someone that didn’t enjoy hiking with him, and in fact, he said he felt lucky that I did all kinds of outdoor activities with him including rock climbing, biking, camping, snowshoeing, and snowboarding.

We eventually reached the springs and found the same spring that, a year prior, we had hung out at while Banana fetched her ball in the water. I was relieved and surprised to find that this spring was not occupied by anyone relaxing or playing in it, but it was only a moment later that another young couple with two large dogs joined us at the spring from the other side.

I was really disappointed that we would not get to have a romantic moment back at this spring alone. We hung out for quite a while eating sandwiches, drinking wine, and playing with the pups before the sun began shining its last few rays and we decided we should start hiking back.

As we were hiking back, Bryce walked off-trail and I assumed he was going to “water a bush”, as he normally does on such hikes, but as I looked back at him I saw that he wasn’t taking a pee break and was actually setting his backpack on a rock.

I gave him a puzzled look as I still continued walking. He shouted to me to come join him and check out the view. It didn’t seem like there was an interesting view to check out from where I was walking, but I turned around anyway to join him.

When I arrived at the rock I realized my prediction was true and there was indeed no view. I asked him why he wanted to stop there when there was no view and he said he just wanted to relax for a moment at that rock.

Bryce briefly said again how much he loved me and paused to say that he had a question to ask me. I asked “what?” as he dug around in his backpack.

It only took a mere second for my heart rate to jump up to a tachycardia rate as it instantly occurred to me what he was going to ask.

He pulled out a white ring box from his backpack and with a nervous and mischievous smile on his face, opened it and asked if I would marry him.

I immediately burst into tears, still not really believing the scintillating object that was being held right before me and the seemingly rhetorical question lingering in the air waiting to be answered. Through my tears and bawling I asked him several times if he was “for real” before finally responding “yes of course!”

It was then that I realized what his two hour grocery store errand earlier had entailed. Boy is Bryce good at picking out deli meat!!!

Our initial first hike in Jemez Springs in 2010 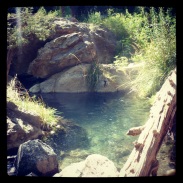 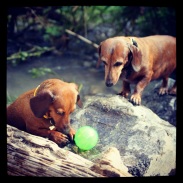 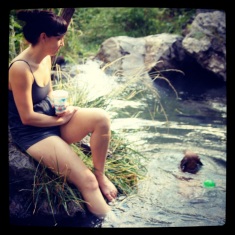 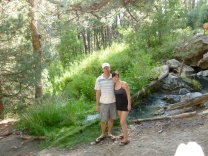 The spring we played in.

The rock with no view!

Battleship Rock parking after the hike back.