Bryce and I gave in. We popped the big question. I spent a lot of time thinking about this big commitment and whether we should do it or not, but in the end, it seemed like the right choice. I already feel the weight of a million bricks lifted off my shoulder.

First of all though, I should mention that a week ago we had some very exciting news that Bryce’s dad was going to contribute a great deal of money for our wedding. This was a huge relief for both of us, as we both had been silently stressing over how we would pay for a wedding.

The budget is the first thing a couple is supposed to work out when starting to plan a wedding, but that’s easier said than done. How do you make up a budget when you have no idea how much things should reasonably cost?

And more importantly for me, how do I make up a reasonable budget when I have no money of my own to contribute towards the wedding and no idea what money is available to be spent?

As a couple that is about to married in about a year, we should be able to have good communication and open conversations about anything, but talking about money is such an awkward subject! Asking Bryce how much of his money I can spend on our wedding is no exception.

I mean, exactly how do you tell your soon-to-be husband that you want $3000 for your dream wedding dress or $5000 for a wedding planner because you have no idea what you’re doing? And that’s just the start of all the costs. How do you explain that venues and food can cost as much as $10,000 and a photographer another $5000? Even my jaws dropped at the realization of all these costs and it’s not even my wallet that is being emptied!

When Bryce’s dad first announced the dollar amount he was willing to give us, we were floored. To me, it seemed like an excessive amount of money, and more than we needed. I figured we could use half of the money and save the rest for a honeymoon. But it wasn’t until I started looking at real venues instead of doing a remote camping spot (since we could afford it now) that I realized how quickly that chunk of money would disappear.

When you haven’t planned a wedding or when you’re not the type of person to fall in love with pretty details, you don’t really understand how someone can spend so much on a wedding that really should just be a simple celebration of two individuals uniting and devoting their lives to each other.

I have struggled a lot in this past month of wedding planning with exactly how much I am comfortable spending on a wedding. Even though it’s technically not my own money that is being spent, it still hurts to see all that money being spent on flowers and decorations that will only last a day, fancy wooden chairs that will be sat in for a few hours, a dress that will be worn for an evening, a gorgeously decorated cake that will be eaten within a few minutes, invitations that will be quickly read and tossed in a drawer, and party favors that will be left untaken.

Additionally, I have struggled a lot with the fact that I will have such a small wedding and that less than 50 people will even see this elaborate party that I have designed and stressed over every detail for the past 12 months.

Why not just elope?

Bryce and I have already joked a million times now at each stressful financial climax, that we should just run off to Vegas. I think that sometimes he really is not kidding, but I am. I know it’s a lot of money to spend, but if we are going to have a celebration of the two of us, it should be a celebration that represents us. Vegas is far from who we are… although lounging by the pool with a margarita does not sound too unlike me.

But in the end, you really have to let go. We aren’t spending the money just for that day, we are spending it for a lifetime of memories — hence, why I justify spending a ton of money on a good photographer to capture the details of the day!

And unfortunately, I am the type of person to fall in love with pretty details. I simply can’t have a party and not let it be anything less than extraordinary. I want it to be a wedding that not only 50 wedding guests see, but one that is beautiful enough to be magazine worthy and that is eye candy for a hundred future brides to drool over, just as I did of many other couple’s published dreamy weddings.

Which brings me to my second point. A wedding planner.

One of my biggest struggles so far has been the decision to hire a wedding planner. While every blog and advice I read said hiring a wedding planner was just short of a necessity, I still found it hard to concede and part with thousands of dollars for a wedding planner. But in the end, I knew that, left to my own devices, I would probably design a wedding that looked like a child’s stuffed animal tea party, so I gave in (with the permission of Bryce first!).

After sending out several emails to wedding planners whose weddings I adored and rereading over responses for several days, the choice became perfectly clear.

The first wedding planner I emailed had impressed both Bryce and I right away. Although she was out for a wedding at the time that I first emailed her, she still took the time to respond really late at night the same day. She was fun and energetic and just our style — an important consideration for someone we would need to spend months planning and getting along with and someone that would be responsible for designing the most important day of our lives!

I had only hoped that none of the other subsequent planners I would email would be as cool as her…. and luck would have it, they weren’t!

After getting swift go-ahead from Bryce, we popped the question to our soon-to-be wedding planner, and we were on our merry way finding potential venues the very next day! 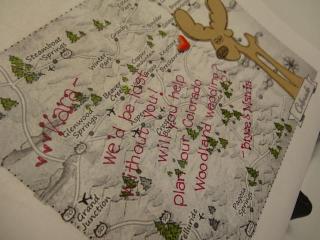