Several months after choosing our layout and lot at Midtown, we were finally able to start meeting with vendors to choose the details and options for our home. I had thought this was going to be the really exciting and fun part of the process, but most of it surprisingly wasn’t.

While we were able to do a few initial selections for options with the builder, such as appliances, most of our appointments came much later down the road with vendors contracted through the builder. There were seven vendor meetings in total that we had to have completed by a certain deadline and these included the following

Some of the first few meetings we got out of the way were my least favorite and least exciting. Fortunately, they were some of hubby’s favs, so I let him take the lead on those.

HVAC was our very first meeting, and since it was hubby’s particular specialty (being that he’s a mechanical engineer and all), I let him soak in all the nerdy, dirty details of that one while I gazed around the room. It ended up being a fairly straight forward meeting though. Did we want air-conditioning? And if so, did we want to upgrade to better furnace options or dual zoning for the upstairs and downstairs? We ended up going with just the standard option for HVAC, which broke hubby’s heart to not get something fancier, but the upgrades were just too expensive.

Our next couple of meetings for the solar system and electrical system were also pretty boring, in my opinion, but fun for hubby. We decided to go with only the standard option for the solar panel after hubby did some really nerdy calculations to see if it would get a good return on our money if we upgraded.

For electrical, we had a really arduous appointment deciding where lighting pre-wire and electrical outlets should go. This stuff was particularly difficult to envision without actually currently being in the home and looking around at exact placement of things.

It was at this point that we were glad we had chosen one of the layouts that was featured in the model homes because we were able to take several trips back to the model home after our appointments and compare the upgraded options in the model home against the standard options. The visual of the model home helped a little bit in deciding what would be necessary to have or add, and what wouldn’t. In some cases though, we had no clue what would work best. Should we have 20 billion canned lights in the living room or only 10? Who knows! 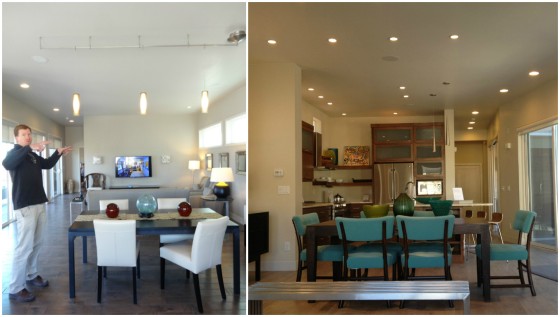 Pie talking about drop lighting. And look at all that lighting in the model home! Do you think we had any freaking clue what we were doing at our electrical/lighting appointment? HELLNO!

When we finally got to the appointments for cabinets and interior finishes/fixtures, I was so unbelievably stoked! We were finally getting to the pretty stuff that really made up the home! Unfortunately, my excitement dulled quickly in the first few minutes of our first design appointment. It was much more difficult and less exciting than I thought it would be to design the interior of our home.

Instead of the design consultant setting out a bunch of options to pick from and giving suggestions on some cool trends, she simply asked us what we liked. I was a bit thrown off by this method. The design consultant had warned us ahead of time to do some homework and browse Houzz to get an idea of what we liked, but we were bad students and didn’t do our homework. We didn’t have much of a vision, but even if we did, we knew it would probably not be affordable. We figured it didn’t really matter what we wanted; it was more important what we could somewhat afford.

Meanwhile, it’s important to mention that there actually was no “we” in this design appointment. Hubby was physically present, but opinion-wise, he was not! He was very supportive of the designs elements I was suggesting, but was giving practically no suggestions of his own. While you would think every woman would want free reign of designing their home, this was actually a lot of pressure to be the only one picking all the design elements. It was impossible to know how the finished look would come together. What if I messed up? What if I picked options that were totally hideous? It would be all my fault in the end!

Needless to say, at this point we definitely took a good look at every single detail of the model homes to get good ideas for what we liked and what we didn’t like. The most difficult factor to take into consideration during this process was money (well, duh!). Every little design detail added up to so much money and every detail felt like something I had to have. We really had to weigh our options and decide what was a priority to try to afford and what wasn’t.

Added on to this difficult appointment was the fact that we still hadn’t completed all our vendor meetings and there were still other options left to select in our closet and low voltage appointments. We had no idea what the options in these other appointments would cost.

We were very fortunate to have a relatively decent amount of money to spend towards the interior design portion of our home (mostly thanks to hubby sacrificing other things he wanted to get with other vendors such as an upgraded furnace) and we tried as best as possible to budget ahead of time and predict what we could spend in the design appointment, but there were still a few options and elements that we swooned over and had to let go. It was easy for me to sometimes focus on what we couldn’t afford, so it was wonderful having hubby around to remind me of everything we were fortunate enough to get.

After visiting the model homes and doing a lot more homework, we came much more prepared to make our final design decisions in the second appointment. We kept the design of our home very clean, contemporary, and simple by choosing a color palette that consisted of mainly grey and white elements: greyish brown cabinetry, greyish brown laminate plank flooring on the entire first floor, sparkly white granite counters for the kitchen and bathrooms, plain white tile for the showers, and white tile with a to-die-for linen texture for the bathroom and laundry room floors. In the end, I think we maintained a good balance of splurging and budgeting, but it wasn’t easy. 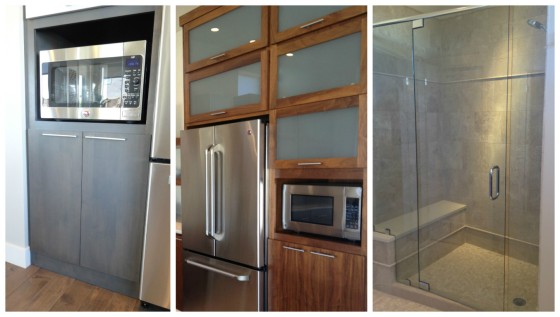 Some of the pricier things I identified as priority desires: the grey cabinet color, glass cabinetry doors above the fridge, and a glass, frameless shower door. 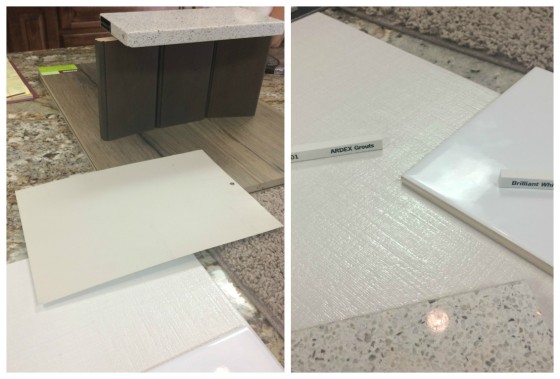 The closet appointment ended up being another somewhat difficult appointment to decide options on. While it was helpful that the vendor gave us drawings of what the standard options were for the closets in each room, it was nearly impossible envisioning whether these standard options would be adequate, especially when it came to the pantry shelving and master bedroom closet. And of course, it didn’t help that the model homes had upgraded shelving and storage options that were really appealing.

We were allowed to make any changes we wanted to the standard closet designs and everything was custom-made, but the prices were a huge mystery to us until our ideas were drafted and priced out. During our first closet appointment we were told to choose as many options as possible that we were interested in so they could at least price out everything. We could remove any of these options later in our second appointment if we decided we didn’t want them.

We tried to stay very modest with our extra shelving and storage options, but when we returned for our second appointment, we were very stunned by how much just a few upgrades cost. We ended up making lot of changes after our initial closet appointment so we could stay somewhat close to our budget, but in the end, we left pretty satisfied with what we chose and only slightly wounded from the sticker shock. Some of the upgrades we decided to go with were more storage and shelves in the master bedroom, an L-shaped shelving unit in the pantry, and an upgraded color choice (from the standard white) in the laundry cabinetry and mudroom cabinetry. 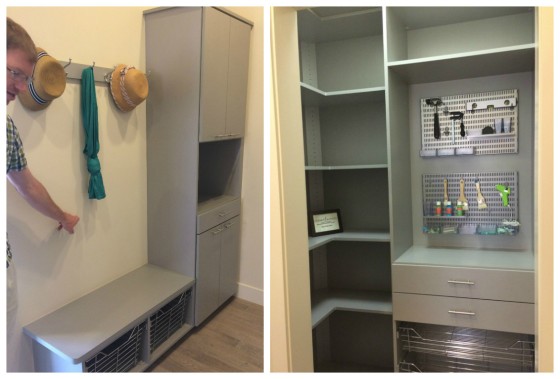 Pie talking about the design for our mudroom shelving. And look at that fancy pantry shelving! Standard shelving in the pantry was just a few white shelves against one wall only. Bah!

Our last appointment, was the low-voltage and technology selections. We went into this appointment thinking it was going to be mostly a waste of time because all we wanted was pre-wire for a stereo system, but we ended up leaving with a central vac system as well. This was a huge upgrade and something that I had really wanted in the very beginning, but after all our other appointments that went over budget, I decided to let it go. Strangely enough, it was hubby that was impressed with the central vac system and convinced that we should splurge for one. I was a little apprehensive about spending the money, but definitely couldn’t say no. We had a central vac system at my last place of work and I loved the convenience of it. Hubby was sold on the idea of how hypo-allergenic it would be as opposed to a normal vacuum. 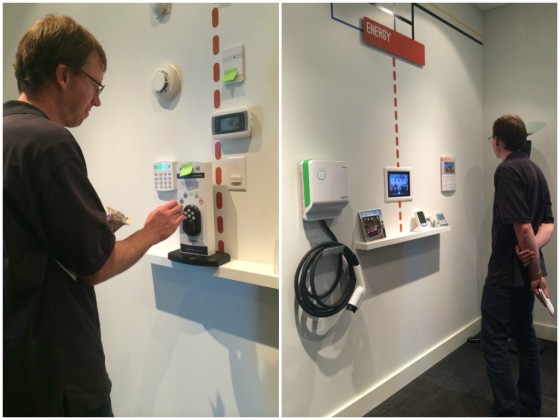 Pie getting his hands on all the fun options at our technology/low-voltage appointment.

After choosing all the options and details of our home, we were finally able to sit back and wait for our house to be built!