By the third day of our Hawaii vacay, I was no longer exhausted enough to sleep through the roosters crowing at the butt crack of dawn. I woke at 6:30 am and couldn’t go back to sleep, so I sat wide awake in bed for twenty minutes until I literally jumped out of bed and realized that I should be on the beach waiting to see if there was an awesome sunrise to watch instead of laying in bed.

With hubby still snoring away, I snuck out, walked to Tunnels Beach at the end of our private road, and waited for the sun to rise. I had hoped the scattered clouds on the horizon would make for a pretty sunrise, but they ended up being just a tiny bit short of awesome. In any case, it was still worth it to get up early in the morning and enjoy the day before the clouds and winds blew in. 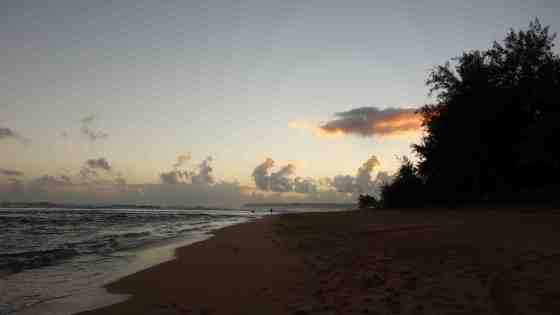 After the sun had risen, I decided it was a perfect opportunity to take a quiet walk along the beach to the other side of the cove. It was nice to be able to see this green landscape with the sun facing on it, instead of behind it and muting its brilliant colors. 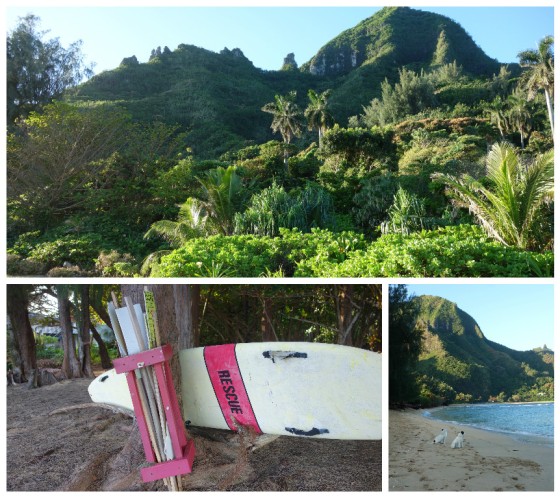 Top – the lush scenery at Tunnels Beach in the morning glow. Bottom Left – a rescue surf board and beach warning signs. Bottom Right – two dogs that were gazing out at Tunnels Beach, as if nothing could break their concentration.

After taking a long walk along the beach cove and back, it was time to get ready for our kayaking trip. We returned to the Kayak Hanalei rental company, rented our kayaks, and slathered on sunblock for a day of kayaking on the Hanalei River.

We had two options for kayaking, which were illustrated on a photo map before we entered the water. We could paddle upstream to a bridge, which would take 45 hours out and 30 minutes back, or we could paddle downstream to the Hanalei Pier (and beach), which would take 30 minutes out and 45 minute back. The rental company had warned us that with the recent weather conditions and wind, going further out in the ocean with the high surf was not recommended.

It’s no surprise that Pie wanted to do both options, so it was just a matter of deciding which option might be easier coming back. We decided we would do upstream first.

I had insisted that we rent two single kayaks (so we could take pictures of each other during the excursion), but five minutes into our paddling I had already regretted this decision. The sun was in full force that day and somehow it wasn’t slowing down my husband, but it was certainly slowing me down! I couldn’t keep up with my hubby, so he spent a lot of time waiting for me to catch up. I was certain that all this paddling was going to result in me not being able to pick up my mai tai later and the thought of this made me less and less thrilled to keep paddling.

After kayaking to the bridge and back, we decided to head out to the pier and ocean. Once we reached to the ocean, Pie was on an immediate mission to do some sea kayaking, despite the surf warnings from the rental company. Of course he did just fine with the surf and came back fully excited about his adventure out to sea. Although he tried persuading me several times to try this sea kayaking adventure as well, nothing could convince me to kayak out to sea with my meager paddling abilities. In fact, once we were all done exploring the pier and beach, I had a difficult enough time trying to kayak from the ocean opening and back up the river! 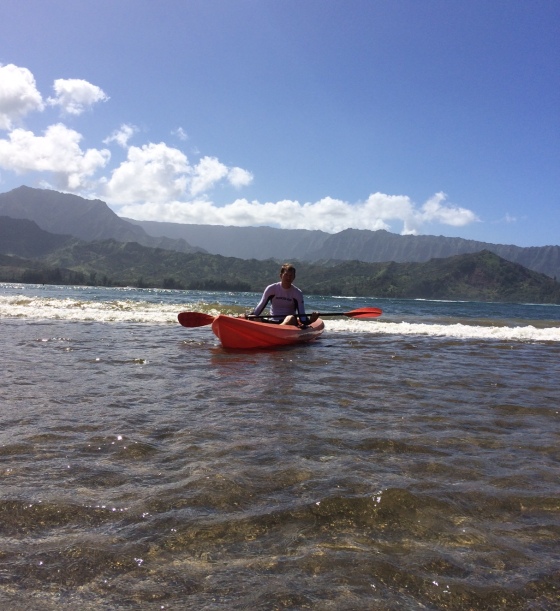 After our kayaking adventure on the Hanalei River, my arms were exhausted and I was ready for some relaxation! We walked from the kayak rental location into the town of Hanalei and grabbed some drinks and appetizers. By this time, the wind had started to pick up and I had a bad feeling that the forecast we had previously seen was starting to come true.

We returned to the Tiki Hut later in the afternoon and got ready for our Valentine’s Day dinner for that evening. The first thing we noticed after getting back home was that both of us had apparently not done a good job putting on sunblock on this ridiculously sunny day. Pie had some really nasty sunburns down both legs and I had random blotches of sunburns on my inner ankles. It was somewhat unfortunate that we chose to do a 4-hour kayaking adventure on the one day it was sunny during our trip. Oops.

Before we headed out for our Valentine’s Day dinner, we walked down to the beach for a quick photo and indeed, the weather had gotten worse. The sun was still out, but the wind had picked up considerably and the surf was the highest we had seen it so far.

It was very disappointing that the weather had taken a turn for the worst and was following exactly what the forecast had predicted, but we headed back into Hanalei and still had a very nice meal at Bar Acuda, which ended up being one of the most romantic places we had dined out during our stay in Kauai.

Up next: We take a long hike to Hanakapa’ai Falls and get lost.