At 7:00 am on day 5, I convinced Pie to jump out of bed with me and walk down to the beach to see the sunrise. With the high possibility of rain later that day, I figured maybe a few clouds had rolled in that morning that would create a colorful sunrise. Well, that was wishful thinking!

It was difficult to tell from our rental property what the weather was like because we were nestled in lots of trees, so it took us an entire 5-10 minute walk down to the beach to find out that the weather was anything but sunshiny. In fact, we were literally blow away by the windy and cloudy weather that morning!

The clouds that morning were not clearing up any time soon, so we didn’t linger long at the beach before heading back to the Tiki Hut in disappointment.

By this 5th day, the crummy weather was surely taking a toll on my mood (hubby can attest to this!), but I still had a tiny glimmer of optimism left. Since Kauai’s north shore was known for being rainy, a small part of me still had hope that if we traveled to the south shore, we would experience entirely different weather.

We continued on with our day and traveled to the south side of the island, hoping for sunshine and calm waters… but found this:

As it turned out, the south shore had exactly the same weather as the north shore, and with that, I pouted all through our lunch with the sad realization that our whole vacation was likely going to be like this and there was no escaping it. We would just have to deal.

After lunch, we killed some time shopping and visiting a touristy spot called the Spouting Horn, which was simply a hole in lava on a beach where water blew out of during large ocean swells. It was fun to see… but not what we came to Hawaii for!

I had hoped that while killing time on the south side of the shore, that the weather would clear up just enough to do a quick bit of snorkeling at one of the beaches nearby that was known for sea turtles, Lawai Beach.

When we arrived at Lawai Beach by the early afternoon, the skies were still cloudy and misty rain was pouring off and on. Pie decided right away that he didn’t care what the weather was like and he was going in the water. I, on the other hand, stayed in the car pouting and hiding from the drizzling rain. When the sun finally broke through the clouds about 20 minutes later, I finally grabbed my snorkel gear and hesitantly joined him. 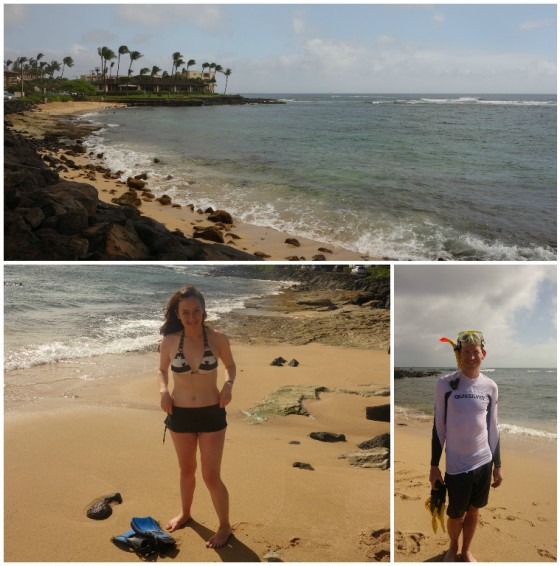 Snorkeling and Lawai Beach turned out to be some of the best snorkeling on our trip! The weather and waves were not perfect, but they were as harmonious as we were going to get them on our winter vacay in Hawaii. While we didn’t end up seeing any sea turtles at Lawai Beach, we did see a ton of colorful (and sometimes literally flourescent) fish and we were far enough above the reef that I felt comfortable snorkeling. I almost didn’t want to get out of the water, even when the clouds started to roll in again!

After snorkeling for about 30 minutes at Lawai Beach we decided to call it good. We drove over to another popular snorkeling beach nearby called Poipu Beach, but either the weather had changed in that time or this beach was just prone to more wind because the water conditions there seemed less ideal. We hung out on the beach for about five minutes and decided we had had enough of the wind that day… it was time for Happy Hour!

We had drinks and snacks and a fun place nearby called Tortilla Republica. This place ended up being one of my favorites that we dined at on the island. We sat on the patio and while the weather was still windy and awful, the scenery was great! After our meal, we enjoyed the only good thing that came out of the rain on our vacay, a gigantic rainbow that spanned the entire horizon. And with that beautiful end to our day, we headed back to the north shore to get some rest! 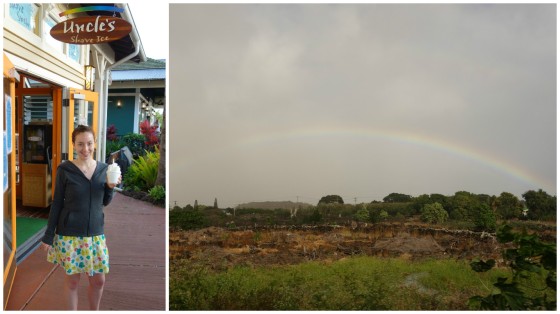 Up next: We take a helicopter tour around the island in, you guessed it, windy weather!