One of the latest DIY projects hubby completed was our kitchen backsplash. Oddly enough, this was one of the projects that we thought we would do right away when we moved into the house because we thought the kitchen walls would look really bare and weird without it, but it ended up taking us almost a year and a half to get around to this project.

We delayed this project for so long, partly because after we moved in, we kind of thought that the walls looked just fine without tiling; but more importantly, we didn’t just intend to tile the area behind the stove or beneath the cabinets, but I wanted to tile the entire wall area in the kitchen up to the ceiling, which seemed like such a daunting task. We had the Brookfield model home in Midtown to thank for that crazy idea…

Brookfield model home with a pretty beige “penny round” tiling

Hubby kept asking me several times if I was sure I didn’t want to tile just the area below the cabinets, but I was dead-set on the entire kitchen area being tiled because it just looked more cohesive. During our home-buying decision process, we had visited a “spec home” by Brookfield with our same layout and the kitchen had the backsplash tiling just below the cabinets and I didn’t like the “half-done” appearance, especially with the open shelving. 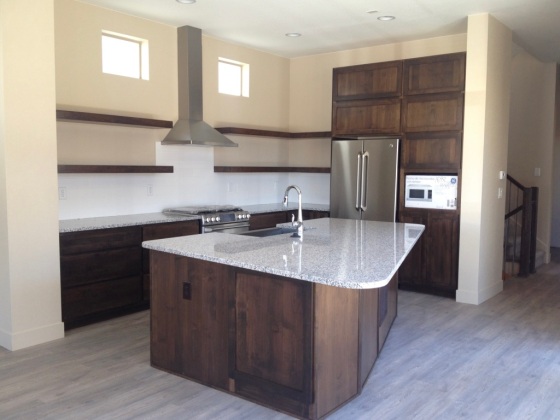 Brookfield “spec home” with tiling below the bottom shelving only.

It’s no surprise that the first step in this project, choosing the tile, turned out to be just as long and drawn-out as all the other design selections we had made thus far for our home… and, of course, I might have made it more complicated than it needed to be.

Although I really loved the modern look of white subway tiles with contrasting grout, everyone and their dog was doing this option for a backsplash, so we set out on a mission to choose tiling that was classic and timeless and not too “busy” looking. We weren’t impressed by the typical home improvement stores’ tiling options, so we ordered several tiling options from Wayfair. They were all fairly similar in style because I already had my mind set on doing a white tiling option, preferably penny-rounds, similar to the tiling featured in the Brookfield model home. Hubby had thrown in the hexagon options mostly for kicks. 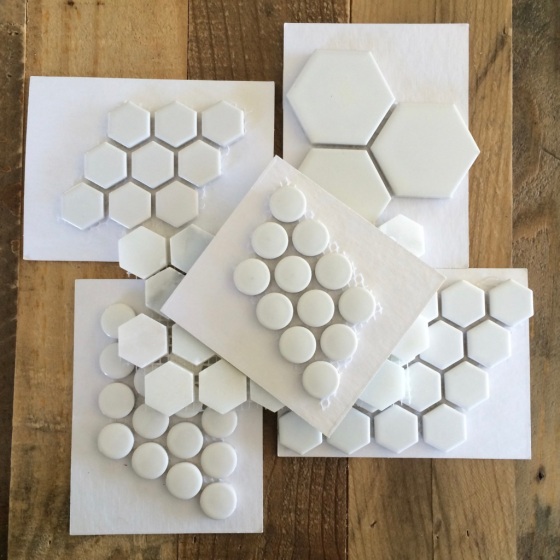 I did tons of searching on Pinterest on Houzz to get a better idea of what our tile samples would look like in full-scale and before I could get far into my search, I stumbled upon a kitchen design that made me fall in love with one of the options I was least expecting… the two-inch hexagon that hubby picked!

A kitchen with a hexagon tile backsplash, designed by Annabode + Co.

A close runner-up was the marble hexagon tiling, but I worried it might be the “busy” type of tiling I was trying to avoid.

We had assumed all along that we would purchase our tile online from Wayfair because we had received a coupon in the mail that would give us a good price, but after looking at the coupon in more detail, we realized it wasn’t valid on tiling. Furthermore, the shipping charges on several boxes of tiling were outrageous! For a brief moment it seemed like we would have to start over from square one and just choose a overused tiling option from one of the home improvement stores, but then we discovered that there was a tile store in town called Floor & Decor that didn’t have ridiculous prices and possibly had decent customer service.

Sure enough, Floor & Decor was a goldmine! We should have started our whole search there because they had many of their options on large displays and didn’t have just run-of-the-mill options. We resisted the temptation to reevaluate our tiling choice and went ahead with the white, two-inch hexagon as planned.

Hubby began tiling in early October and it only took one day for us to realize that this wasn’t going to be the one-weekend-only project we thought it would be.

I had decided from the very start that I didn’t want to be involved in the actual process of tiling because it would have only made things worse to have me standing over hubby’s shoulder giving him my two cents about how he should do every detail. Hubby had proved himself to be capable of executing detail and care (for the most part) in most of the DIY projects we had done thus far, so I trusted him to get the job done…but not before I questioned him a million times before he started, asking if he was sure he knew what he was doing.

After another day of tiling, which went quicker than the first day, I finally decided to peek at hubby’s progress and noticed this: 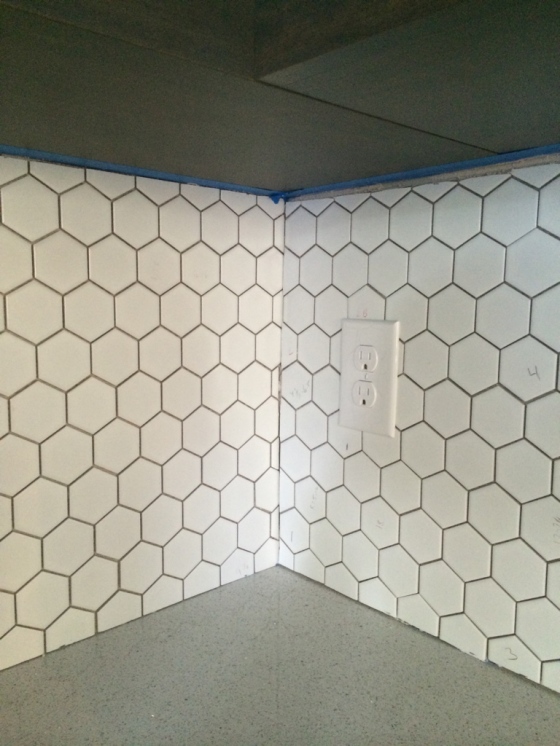 Hubby hadn’t even considered the fact that the tiles should be cut so they met up at the corner edge, much less that a grout line should have also been left in between them. Oops! And although he had started out with a reasonable grout line between the tiling and the shelf above on the left wall, as he made his way over to the wall on the right, he made an obnoxiously thick gap for the grout. Being the tyrant wife I am, I insisted both of these areas be redone.

Hubby ripped out all the tiling in the back area so he could realign the corner tiles.

Hubby was quickly back on track after this initial snafu, but despite his exponential learning of the tiling process, it still took a month and a half to finish cutting and placing all the tiles. This was no fault of hubby’s though. As it turns out, choosing the two-inch hexagons was quite the nightmare. Each hexagon tile had to be cut individually with the tile cutter in order to get consistent and precise grout lines along the cabinets, shelves, and all other edges. We were thankful we hadn’t chose the tiny penny-round tiling option because that would have been an even more laborious task of cutting individual tiles, but it didn’t make this current project any less miserable.

We decided to tile behind the kitchen vent hood rather than around it, so we had to take that clunker down! 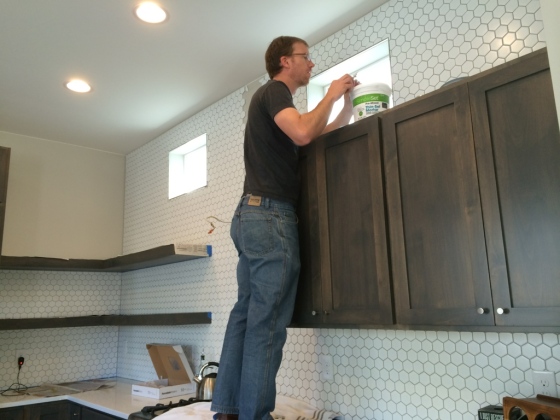 Needless to say, I think that hubby was thrilled to cut and place the very last tile late one November night and probably never wanted to see a hexagon tile ever again in his entire life…except now they were plastered all over our kitchen walls. 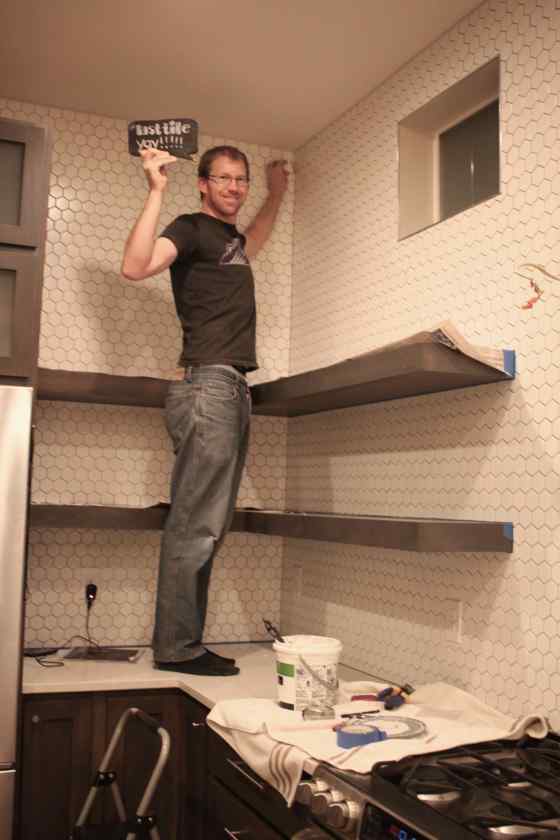 After all the tiling had been placed, we were still only halfway finished with our project. There was still a ton of grouting to be done!

Choosing a grout color was as equally challenging (and ridiculous) as choosing a tile option. Initially I had liked the idea of doing a contrasting medium grey grout, but as hubby began laying the tile, I panicked that the hexagon tiling was indeed too “busy” and thought that a white grout would help subdue the look. After seeing the tiling with dark, ungrouted lines for a couple of months, surprisingly, I warmed up to the idea of doing a dark grout. On the other hand, while the tiling may have looked fantastic with dark lines with the kitchen shelving bare, would it go back to looking too busy once the clutter was added back to the kitchen shelves?

It’s no surprise that hubby didn’t want to go with boring white grout that would camouflage the tedious white hexagon tiles he had just finished placing for 1.5 months.  He wanted the tile to stand out, so we were left with color options of either a light or medium grey.

Being the awesome hubby that he is, hubby created a DIY display of a few grouting options with the tile, but this still didn’t really help to make the grout selection and I was getting sick of wasting money purchasing entire bags of powdered grout and small tubs of pre-mixed grout that we might not use (apparently there is no such thing as getting a small sample of grout to try, except if you get the more expensive pre-mixed kind).

In the end, we were so anxious to just get on with the project and get our kitchen back that we pretty much closed our eyes, pointed at a grout color, and chose it. Well, not really, but that’s what it felt like! We decided to go with a light grey grout in the powdered form and got to work finishing our hexagon backsplash!

Adding to an already arduous project was the fact that when hubby took down the kitchen vent hood early on in the process, he discovered the hood wasn’t bolted very securely to the wall. Finding more appropriate bolts and hanging up the clumsy and heavy vent hood again was just another thing that caused this project to take much longer than we expected in the beginning.

All in all, the project took about three months (this consisted of only working on sporadic weekends) and cost about $450 for tiling, grout, and metal edge trim. Other supplies, such as the tile cutter and tile saw (needed to trim tiles with 90 degree or complex cuts, such as around the shelving corners), were approximately $25 and $100 respectively. This cost was a huge difference from the cost the builder had quoted us ($3100 for a large, 12×24 tile option up to the ceiling or $5300 for a white penny round tile option up to the ceiling), so the DIY cost was well worth it in the end, despite all the sweat and time required.