Monday was our last full day in Maui and we had yet to do a hike, so this was the day to knock one off our list! I was a little worried that the only good hikes (i.e., the crazy ones we like to do) in Maui would all be located back on the opposite side of the island in the Haleakala National Park where we had just come from the day before on our Road to Hana trip, but we were in luck!

While searching online for another waterfall we could possibly visit on our side of the island (you probably guessed it — I wanted to take Mingo for another swim!), I found the Waihe’e Ridge Trail. Reviews of the hike said if it had rained, there was a waterfall you could see at the beginning of this trail. Other than that, there supposedly weren’t any grand waterfalls to visit on our side of the island.

Besides the waterfall though, this seemed exactly like the kind of hike we were looking for — something slightly strenuous and steep (so there wouldn’t be as many tourists) and great views of Maui.

We arrived at the trail late morning, but the parking lot didn’t seem jam-packed like a tourist attraction, so I was happy about that. Although the sky was blue and mostly clear over the ocean, there were clouds and fog covering the top of the trail where we seemed to be heading to, so I wasn’t sure what kind of views we would get on this ridge trail.

The trail wasted no time in getting up there in elevation, as even the very start of the trail was a calf-burner. This paid off though because no more than 10 minutes into the hike, the trail peeked out of the forest and presented us with a great view of a valley blanketed in a bright green landscape.

In the far distance, we could spot a waterfall spilling over the mountainside. I had assumed the waterfall featured on this hike would be something we would be able to walk up to or at least see close, but this waterfall could not have been further away.

No more than five minutes after continuing on the well-groomed, steep trail, we were rewarded with our first amazing view of another fog-topped green valley stretching out into the inhabited areas of Maui with the seemingly calm ocean fading out into the dull blue, cloudy sky.

The trail was steep the entire time, but not miserably so, and led us further and further up in the clouds with several views similar to the first one we had seen of the city below. Towards the end of the trail, we were finally on the ridge section of the trail and could see the trail and other hikers in the distance disappearing into the clouds. 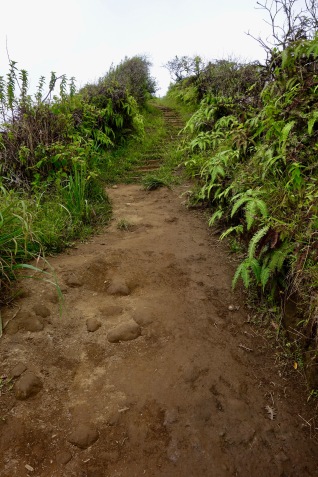 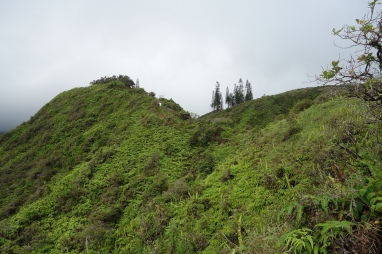 Only two and half miles later and we were at the end of the trail and buried in the clouds. We enjoyed the serenity, but didn’t spend much time at the top before heading back down.

We had lucked out with our hike going up the trail because the sky was mostly clear, but on our way back down, we were able to experience a completely different and somewhat mystical view of the valley and Maui below because some fog had begun rolling in at the lower elevations.

After completing our four and half mile, 1,500 feet elevation gain hike up into the clouds on the Waihe’e Ridge Trail, we headed back on the road, but hubby decided to go back a different way than the way we came in, so we could see some new sights.

We hadn’t thought twice about driving this route, since even Google Maps recommended this alternate route around the north side of the island back to the condo that only took a few additional minutes. Turns out, we had no idea what we were getting ourselves into.

What we should have done was zoom in on our Google Maps to get a good look of what we were getting ourselves into beforehand, which was roads that were probably 20x worse than the narrow, curvy roads we had just experienced the day before on the Road to Hana. Yikes! Not only was this road curvier and narrower, but it also had a sheer cliff drops on one side and hugged rock on the other side for long sections at a time.

Even after driving on the road for several minutes, it still didn’t fully sink in that we were on such a crazy road — perhaps the stunning scenery was a nice distraction or perhaps it was just that the roads in Maui had slowly gotten worse each day we spent on the island and we had become numb to Maui’s crazy roads or perhaps I was just too busy literally yelling at hubby to slow down from his “fast” speed of 15 mph.

I failed to take any pictures of the road, but did record a short video clip of what the drive was like. The video was recorded at just the right time because we happened to come upon another car coming the opposite way where there was only enough room for one car. Luckily, hubby only had to back up a short distance to a wider spot, but there were sections of road that were much longer in between pull-outs where I couldn’t fathom the thought of having to back up hundreds of feet around a hair pin turn.

Shortly into our drive, we passed a sign that said the road was closed further ahead. We didn’t understand why Google Maps would offer this as a route option if we truly couldn’t go through, so we kept driving. Even if we had wanted to turn around, we literally could not have, since the road was that tight!

We kept driving for what felt like an eternity (or probably 30 minutes) and when we finally thought we would be fine to drive all the way through after all, we came to another “closed” sign and a barricade. The large barricade was pushed aside and apparently cars had gone through anyway, but as much as we dreaded the thought of turning back on the ugly road we had just wasted a long time driving on, we didn’t want to continue, get stuck at a bad spot, and not be able to turn around easily if the road was really closed. So we turned around.

Shortly after turning around, hubby pulled over and asked that I drive for some crazy reason, but I absolutely refused. I may have criticized hubby’s driving in Maui, but I actually thought he was a very skilled driver and I trusted his driving 100% more than my own. I just wanted him to slow down in case we came upon cars coming from the other direction that weren’t as skilled or careful.

Hubby reluctantly continued driving while I searched online to see if I could find anything about the road really being closed. Not only did I find out it was closed for repairs, but apparently the road we were on, the Kahekili Highway, was well-known for being a challenging and adrenaline-pumping drive. It is also considered to be one the deadliest and dangerous roads to drive on.

I was glad I wasn’t in the driver’s seat. Even more so, I was glad that we actually hadn’t been able to continue on that road because something tells me that that road got much worse. But why on earth were there no road signs warning motorists how dangerous that road was before they got trapped on it??

Since I’m writing this blog, we obviously didn’t tumble off the side of a cliff going around a blind, narrow curve on Kahekili’s Highway, but I can say we definitely needed a stiff drink after that drive, and we were in luck because that was exactly what was in the books with our next activity later that evening.

It seems like if you visit Hawaii, you have to attend a luau at least once, even if they are not very authentic. The luau we chose, the Feast at Lele, featured a four-course meal and four different shows that would take you through the journey of four different cultures: Hawai’i, Aotearoa, Tahiti, and Samoa.

There wasn’t much to mention about the luau other than we got lei’d, had many amazing tropical drinks and eats, and had a great time! It was especially nice watching the sunset right before our show, since this particular luau was held on the beach.

Next up: Penguins in Hawaii? Say what? …. and we travel to Kauai!