Pie and I weren’t sure what to expect when we visited Telluride for my birthday celebration in December. Our last trip to Telluride in 2016 for my birthday was one of the most memorable and amazing trips I had ever taken because we were greeted with almost three feet of fresh snow shortly before and after arriving, so I insisted on going again thinking we would experience another winter wonderland! For this last visit though, we crossed our fingers and hoped for the best because there had been practically no snow leading up to the trip (except for snow that occurred very early in the season) and no snow predicted for our stay.

Hubby had booked the trip months out from my birthday and the hotel was offering a special deal for two free lifts for every night if we stayed more than three nights. Hubby was pretty adamant on getting this deal, while I was very adamant on not getting the deal because I didn’t see myself being that enthusiastic to snowboard every single day we were there. We ended up not getting the lift tickets (because the birthday girl gets to call the shots…365 days a year) and boy was it a good thing we hadn’t!

We showed up to Telluride and, as anticipated, there was hardly a patch of snow to be seen anywhere, except the snow that was high up in the mountains and the man-made snow created for skiing. It was definitely interesting seeing town visitors decked out in their full ski gear and headed to the slopes with hardly any snow on the ground.

Fortunately, since we had seen this coming, we had alternate plans and decided to take advantage of the lack of snow to do some hikes that we might otherwise not be able to do.

Our first hike started out in good spirits as we made the best of the lack of snow by playing around on the iced-over rivers above the famous Bridal Veil Falls. As it turns out, the early season snow that got everyone excited and hopeful for a good snow year ended up melting in the unusually warm winter and then refroze during the colder winter days. This made for several icy sections on the trail that we had to be extra careful walking on. Fortunately, I had anticipated this and brought spikes for my hiking boots. Hubby just had to tough it out because he’s not a good planner like me and he’s like a mountain goat when it comes to hiking on all kinds of terrain anyway, so he was fine! 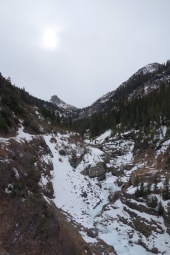 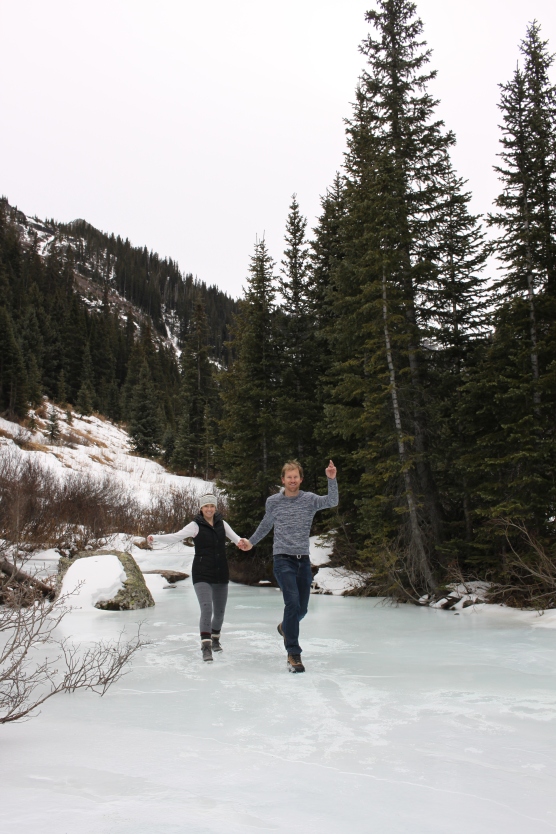 Unfortunately though, the fun was soon over when we realized at about mile 5.5 that we took a wrong turn to get to our destination, Blue Lake. Hubby insisted on short-cutting through steep, snowy terrain, which neither of us was really prepared, clothing-wise, to go through. We both ended up with snow in our hiking shoes which almost caused a legit-case of frost bite. The hike ended up being a long and hard 12-miles, but we made it! We only had a few minutes to spare to enjoy the views at our final destination before we had to hurry back before the sun set.

We were both still very sore and tired the next day, but I was ready to push through the pain on another hike to make the most of our stay. I even started out the day with a quick run along the town’s river before we did our second hike!

Last year we did a grueling 4-mile hike to Bear Creek Falls in an active snow storm and it was probably one of the toughest hikes we had ever done, mostly because it was just so much work breaking trail in two feet of new snow, but it was such a fun hike! I was super curious what the hike would look like without snow and I’m so glad we decided to push through our soreness to do the hike.

We ended up seeing the most magical icy waterfalls along the way! Besides the icy patches on the trail, the hike was much easier to do without breaking trail in fresh snow. In fact, towards the end of the trail, we were literally walking up icy waterfalls in our spiked shoes and it was still a fun walk in the park! 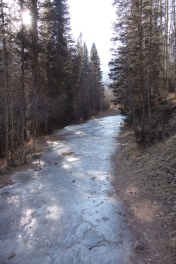 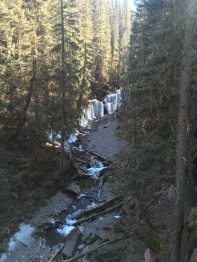 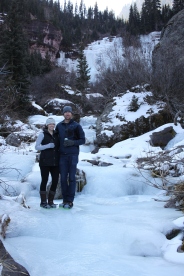 All in all, our early winter trip to Telluride was not a bust and it was just as fun seeing it without snow as it was with snow. Even the dachs enjoyed the trip, despite having to hang back at the hotel by the fire. Imagine that!