There are two holidays we loathe in our neighborhood: New Year’s Eve and Independence Day. One could guess fairly quickly that the thing these two holidays have in common is the noisy and annoying fireworks. Perhaps the illegal firework popping in residential areas has become an issue in many neighborhoods nowadays, but I still feel like the days of seeing fireworks only at official venues is still fresh in my mind, but also fondly reside back in the “good ole days”. Luckily, our pups are not traumatized by the obnoxious noise of fireworks (especially given that one of our dachs is deaf!), but this old lady needs her sleep after 10 p.m.!

Needless to say, we look forward to getting out of town for these two holidays at any opportunity. In the summer, if our work schedules permit, we typically try to get away as far as possible for quiet solitude, which often means camping deep in a forest, but this year, we decided to try something completely different: head to Utah!

This trip was hubby’s idea and once I explain our trip’s itinerary, it’ll be comically apparent that hubby “planned” this trip. Hubby has wanted to take me Moab for years since we met, but with gorgeous Colorado right in our backyard, it’s been easy to put this destination on the back burner. With the four-day Indpendence Day holiday coming up and the amount of snow in Colorado that had yet to melt even in July, it was a no-brainer that we needed to head outside of the state.

P.S. – Don’t believe me about the summer snow? This was our first camping trip of the season in late June in Mammoth Gulch near Central City, Colorado. We weren’t even at a very high elevation and received blowing snow all night long! 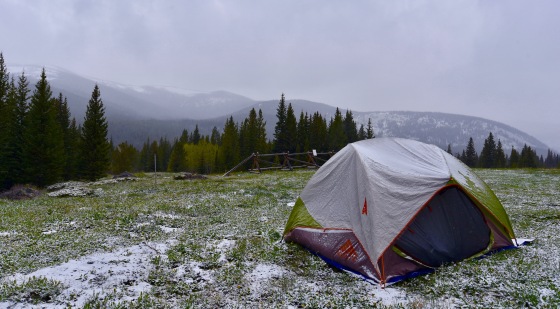 We had four days to spare for our weekend trip and hubby’s idea was to start our trip with a quick detour to visit his sister in Ramah, New Mexico. If you know anything about the geography of the United States (personally, I’m really bad at it!), you’ll know that New Mexico is directly south of Colorado and Utah is directly west of Colorado.

Visiting hubby’s sister down south was definitely not the most convenient stop for our trip to Utah out west, but nonetheless, it was one worth going out of the way for! A visit to see hubby’s sister was also well overdue, as we had not visited her in New Mexico since September 2014 for the baby shower of her first baby boy and she had now given birth to a second baby boy this year, who we had yet to meet in person.

The town that hubby’s sister lives in is very small and remote, but fortunately the one lodging option the town has to offer is actually a decent one! Not only are the Ramah Cabins adorable, but the rural setting provided us with a completely peaceful night for the Independence Day holiday!

Our visit with hubby’s sister and family was brief, as we arrived late the first night after a full day of driving and we already planned to head back up north the next day, but we made the most of it by also doing a quick hike nearby to some falls before we hit the road. Hubby’s sister’s husband played tour guide for the hike by showing us some cool sights, including an open ceiling cave along the dry stream. 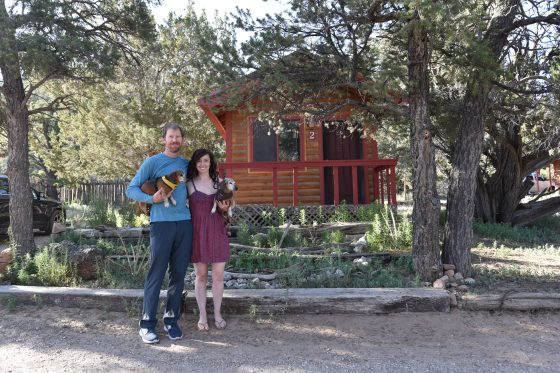 After an hour hike and five hours on the road, we finally made it to our main destination for the weekend, Moab!

Our time in Moab was limited (one full day, to be exact) and I thought I had come up with a brilliant idea when I suggested we check out a little bit of Arches National Park the evening we arrived. I figured this would allow us to not only visit the park when it was less hot and less crowded, but would also allow us to get a head start on tackling the many amazing arches to visit in this huge park.

Unfortunately, everyone else in Moab had this same idea, too!

We arrived at the park at 7 p.m. and it was still quite crowded! We ended up zooming around to a bunch of “walk up” arches and set a plan to come back early the next day and do a long hike that involved a tour of several incredible arches.

We set out at 6 a.m. the next day for long hike in Arches National Park. Hubby and I don’t frequent national parks because they are just so overcrowded and there are literally no destinations you can go to in a national park that are secret or hidden from the other visitors.

Fortunately, Arches National Park consists of just one long road to visit all the sights along and at the very end of that 18-mile road is Devil’s Garden, a nine-mile loop trail containing eight arches that spur off from the main trail. With this trail being far at the end of the park and requiring a long hike, there are relatively less crowds.

It was easy to dismiss this hike as being easy, as we could see so many trademark rocky formations unobscured across the flat, sandy landscape for miles and miles, but we ended up being very glad we started this hike as early as possible because the heat of the day, coupled with the short technical climbs in certain areas, made this hike a bit more arduous than expected!

It ended up getting so hot during our hike (105 degrees according to our car’s temperature at 11:30 am) that it melted and warped the plastic national parks pass we had sitting on our dashboard!

After our five-hour hike, the outdoor pool at our hotel that overlooked the red mountainous backdrop was a welcome sight! It’s not often that hubby and I get to vacation in hotels because they often are more pricey and/or don’t accept pets, so we also don’t get to enjoy lodging that includes amenities such a pools. I know, first world probs over here! We tried to make the most out of this vacation perk since who knows when we would see a pool again, especially in Colorado! 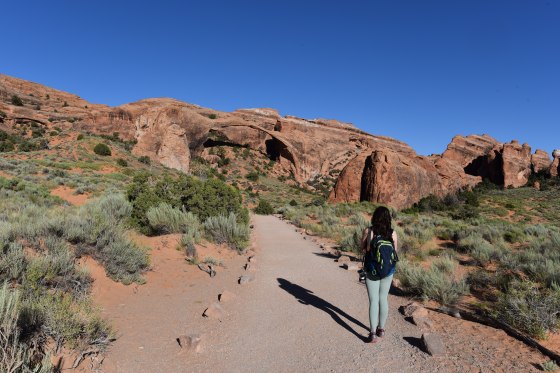 Hiking to Double O Arch was not for the faint of heart in some sections!

Admiring the landscape of the “primitive trail” past Double O Arch. 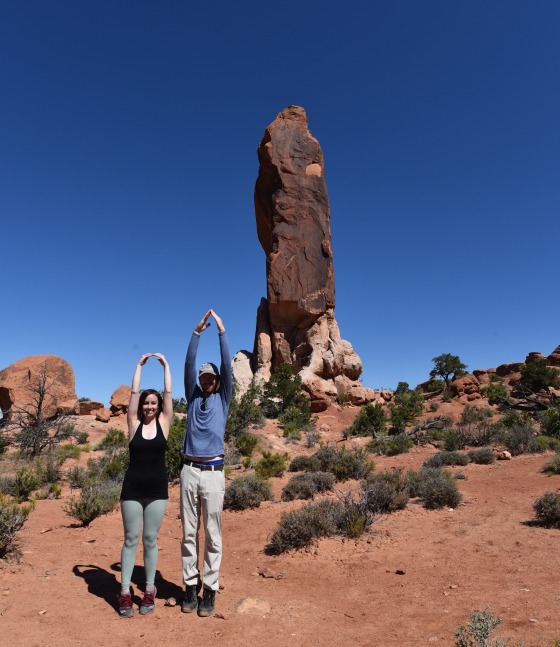 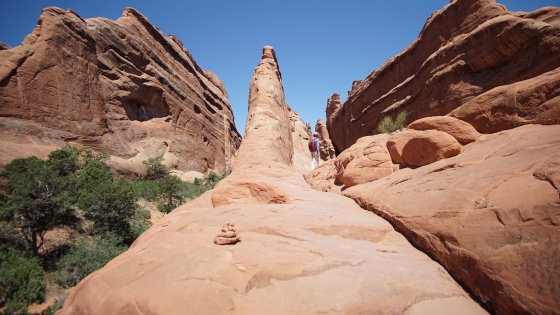 A long section of the trail called the “primitive trail” contains no path to follow because it goes over rock formations. Rather, hikers must follow stacks of rocks (called cairns) guiding the way. One could see how it would be VERY easy to get lost on this “trail” if someone malicious came along and knocked over or moved these cairns. Yikes! 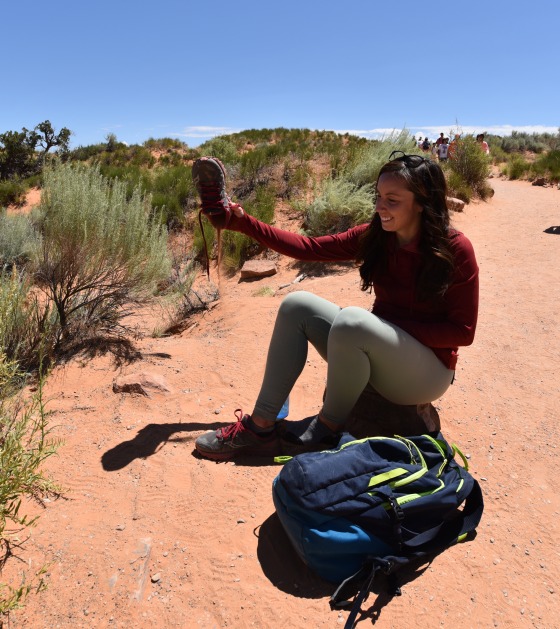 I ended up with easily half a cup of sand in each of my shoes by the end of the hike!

The outdoor pool at the Moab Hyatt.

On Sunday, our final day in Moab, we had a six hour drive ahead of us to get back to Denver, but we wanted to do one more hike, this time with our dachs! The hike to Corona Arch, just outside of town, was the perfect choice because it was just two miles round trip and led to an arch more grand than any of the arches we even saw in the national park!

Yet again, we ended our trip on a high note with many memories in the books! 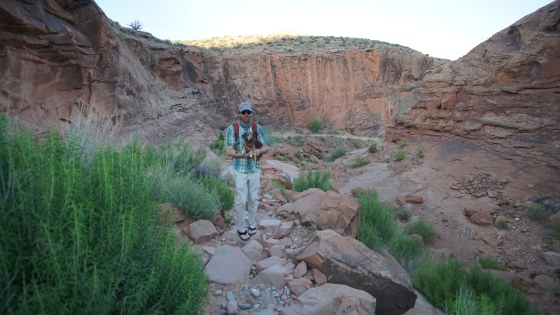 Honestly, nothing hotter than a guy carrying a wiener [dog]. This steals my heart! 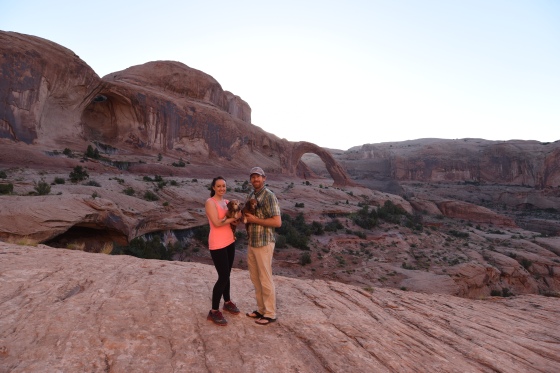 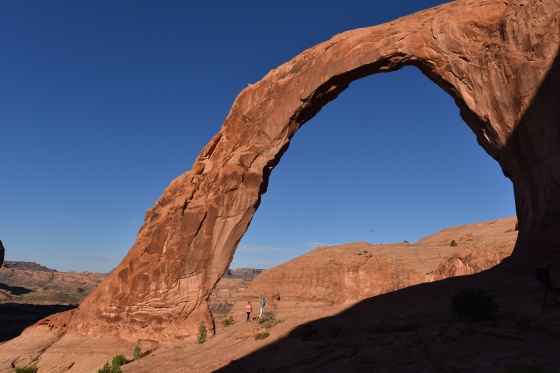 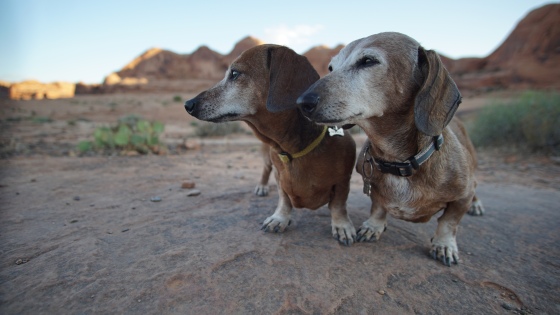 The dachs match the Utah landscape <3