When I began planning our wedding, I had a hard time making decisions from where to have the wedding (in a cheap remote location in the woods or in an expensive venue) to the type of food we would have (pot luck BBQ or catered meal). However, one thing I knew early on during planning was that I wanted to do a “first look” as opposed to the tradition of the bride and groom not seeing each other until the ceremony.

I had not heard of a “first look” until after I was engaged. I remember always seeing photos on Pinterest of couples holding hands around a corner of a building. This always seemed like the obvious, cute solution to being able to visit my soon-to-be-husband before the ceremony without him seeing me. 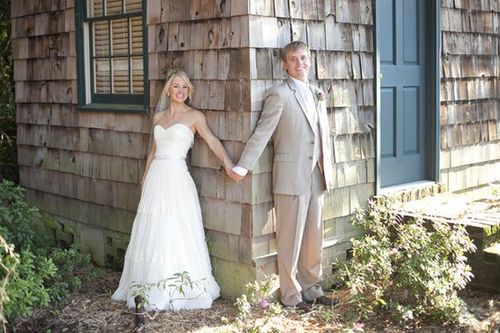 But after browsing the countless wedding forums online, I discovered that many couples these days are straying away from the tradition of waiting to see each other till the ceremony and instead seeing each about an hour before the ceremony, with the photographers there to still capture the moment of the bride and groom finally seeing each other for the first time.

Since I am not superstitious or adamant about wedding traditions, doing a first look made complete sense to me for several reasons:

In my haste to make this decision I hadn’t really considered what Bryce’s take would be on doing a first look. I had just assumed that he would agree with all these points because he didn’t seem like the type of guy that would insist on traditions and would prefer to have social time with his family instead of following a silly tradition. Furthermore, I knew he liked taking tons of photos just as much as me.

It wasn’t until we were on the phone with our wedding planner that I found out I might actually need to do some convincing to get Bryce to agree to a first look. When posed with the question of whether we would do a first look or not, Bryce and I simultaneously responded with opposing answers.

Getting Bryce to agree to a first look ended up not being a difficult task to do. While Bryce liked the idea of not seeing me until I walked down the aisle, he agreed with all my above reasons for doing a first look and resolved that we would still get the same effect of seeing each other for the first time whether we did a first look or followed tradition.

We told our photographers and wedding planner that we were doing a first look and the photographers were especially pleased with this choice because this made it so much easier on them to take pictures before the ceremony rather than squeeze in a bunch of group and couple photos during the cocktail hour. And more importantly, the photographers loved first looks because it gave them the opportunity to take couple photos away from the venue with the possibility of having even more beautiful backdrops for photos.

While this was initially one of the easiest wedding decisions I had made, in the months leading up to the wedding I had lots of time to reconsider whether we were doing the right thing. I hated to back out on the decision we had already told our wedding planner and photographers, but after reading opinions from some of the brides that were so adamant about sticking to tradition, I panicked and began to think we should stick with tradition also. Some of my reasons for reconsidering were:

Ultimately I decided that the pros heavily outweighed the cons and tried not to think about it much during the wedding planning process and in the end I was so thrilled that we did a first look.

While the first look was emotional, it wasn’t as emotional and overwhelming as I had thought and hoped it would be. I had spent what felt like forever (but was only 10 minutes), waiting in my room after I stepped into my dress, to finally see Bryce, and before I knew it, I was rushed off to see Bryce for the first time at a spot beside the house. For logistics reasons, lighting, and time restraints, the photographers had decided that doing the first look at the house would be best.

Because I had just been whisked off suddenly to see Bryce I had not really had a chance to let my emotions set it and realize the significance of the moment – Bryce was about to see me for the first time that day in my white dress and that was a pretty big deal! In many ways, I felt like my day was completely out of my control and in the hands of my photographers and wedding planner and all I could focus on was what would happen next and not necessarily the moment I was in at the time. 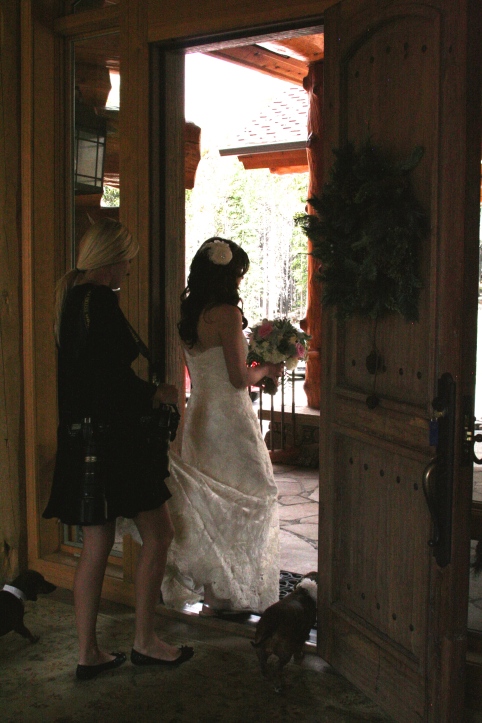 I love this picture one of the house guests caught of me sneaking out of the house for our first look. I was all dolled up and my heart was racing in anticipation of seeing Bryce, and of course, my cute pup Roxie had to tag along for the big reveal.

I had expressed my disinterest in doing the cheesy “tap on the shoulder” ordeal with the photographers but this ended up happening anyway and happened so fast that I had no choice to say “no” to the idea since the photographers had chosen a spot to do the first look right at the house. I did not want to approach Bryce from behind but rather for him to see me coming from afar in a meadow perhaps. I wanted him to be able to admire me walking up to him, much like he would if he had seen me for the first time walking down the aisle. I was caught off-guard by this last minute change of plans and as a result, didn’t really feel the same emotion that I would have had walking up to Bryce and soaking in the moment.

My lil’ pup came for the first look, too! 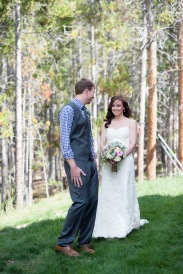 After seeing each other for the first time, we were whisked off again to start our photos in more scenic locations. Our photographers had come early the previous day and scouted photo locations.

I must admit that I felt nervous trusting them to choose the spots we would take pictures at and I have no idea why I would have thought two amazing photographers would have let me down. I had hoped to have time with Bryce to scout out some scenic locations in Breckenridge but I ended up having no time at all to do this so I was extremely grateful for our photographers coming the day before to do some looking around.

They ended up finding an amazing spot in an open meadow with a panoramic view of Ten Mile Mountain Range in the backdrop and another spot by a barn near some gorgeous green aspens.

One of my only photo requests was of us in a stream (since I looove water) and this ended up being a shot that we almost didn’t have time for. I had to insist several times that I didn’t care if we were late for the wedding – it was MY wedding that I would be late for and I wanted that shot in the water! After being held up by very inconvenient road construction on some pot holes down the street, we finally made our way into town to take a quick photo in the river and that was the end of our first look photos before being whisked off again back to the house.

And guest what? We still got those emotional photos of us as I walked down the aisle during the ceremony. 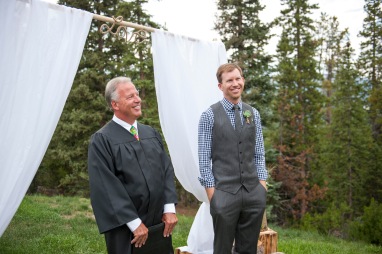 All photos by Brinton Studios