One of the decisions that I teeter-tattered between being confident about and so worried about was my decision to walk down the aisle alone.

From the moment I began planning my wedding I knew that my parents, who live in El Paso, Texas, would likely not attend my wedding, whether we had it in our hometown of Albuquerque, or further away in Colorado. I do not have a close relationship with my parents and while I have matured a lot in the past several years since I graduated from college and moved away, the several attempts I have made to have a healthy adult relationship with them have failed.

But then, sometimes I wasn’t.

Because I knew my parents would not attend the wedding I tried to make the focus of the wedding “all about us” that way I would not be sad about my parents’ lack of involvement. Most couples make it a point to honor important persons in their wedding, such as their parents or family members, and we choose to do the opposite. We weren’t going to have Aunt Susie read a poem or light a candle in honor of Cousin Joe during our ceremony. While it’s not to say that the several friendships in our life have not been an integral part of Bryce’s and my relationship together, we just wanted this day to be about us.

I loved this idea from the very start because this also meant that we didn’t need to have an entire wedding party walking down the aisle and standing up front with us. We wanted our day to  be a celebration of our union and not a circus involving a parade of people walking down the aisle or silly honorary poems and candle lightings. I loved the idea of being able to walk down the aisle alone and for the bride to be the focus of all the pictures. I loved the idea of not being “given away” because, after all, I’m not someone’s possession or property to hand off. I loved the idea of our day being just about our joyous occasion and not about other people who were jealous of our happiness. I loved the idea that this day would only involve those most important to us and not those that we had striven so hard to involve in our lives but still remained absent — because truly, isn’t the person who walks you down the aisle and the people who share in your special day supposed to be those special to you and who have had a big influence on your life? And more importantly, since this day was about us, what did it matter if my parents were not there? All that mattered was that my husband-to-be was standing at the end of the aisle for me.

Other times I hated the idea of walking down the aisle alone. I wanted someone by my side, giving me confidence to walk down the aisle during that emotional moment. I wanted my parents to be at the end of the aisle to give their approval and blessings for our day.

All my worry ended up being for nothing.

On the day of the wedding, we had been whisked around so quickly for our first look photos that I hadn’t had time to think about my walk down the aisle. In fact, in the whir of that afternoon, I had barely had a chance to realize I WAS GETTING MARRIED!

At that point, I still never bothered to look at a clock because all I knew was I needed to get to the bathroom to touch up my makeup. It all seemed to be happening so quickly!

While I had time to run to the restroom, Bryce on the other hand was almost immediately escorted to a spot in the house to wait so he could walk out with our officiant. They were the first ones to walk out. 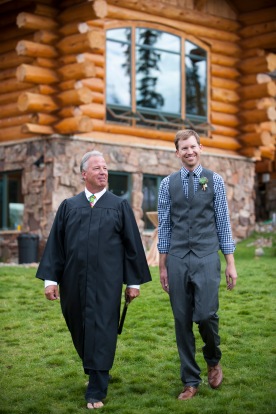 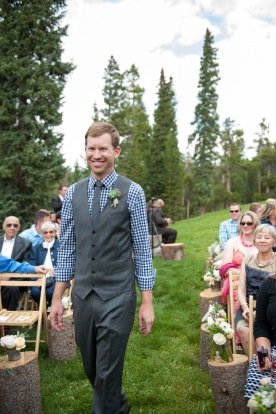 Since I was busy touching up my makeup I didn’t get a chance to see Bryce off for his walk down the aisle. I returned from powdering my nose in time to see the two flower girls and two ring bearer boys leave. I was so focused on how adorable it was that the little kiddos were telling each other how to behave, to be quiet, and how to walk down the aisle, that I again didn’t realize I WAS GETTING MARRIED! I was also too distracted leaning by the window and trying to listen to our bluegrass band play the processional song I had chosen “I Won’t Give Up” by Jason Mraz, that I wasn’t worried about what was coming next. 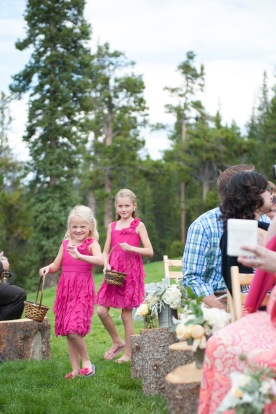 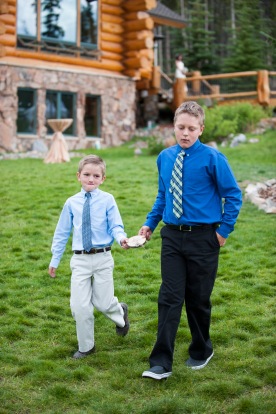 I don’t remember what she said exactly because I had a hard time focusing in that particular moment, but I’m pretty sure she didn’t tell any joke at all. I remember her telling me it was my day and nothing else mattered at that moment… I WAS GETTING MARRIED! And with those last few words I was shoved out the door for my walk down the aisle. And yes, I was bawling!

When it was all said and done, I realized that I had walked down the aisle alone, without a single worry that I had to do it all by myself. And my favorite moment of the entire wedding: approaching the aisle and everyone standing just for me, the bride! I was so touched by that moment and so glad I had chosen to do the walk alone.

All photos by Brinton Studios