It has been over two months now since hubby and I officially moved to Denver and five months since we were married. It’s funny how the year leading up to the wedding went by so anxiously slow, and yet, these months post-wedding have just whizzed by! Feels like just yesterday we had our wedding in the piney woods of Breckenridge.

One of the first exciting adventures we embarked on as husband and wife was relocating to a new city. We both had been very ready for new jobs in Albuquerque and also overall ready for a change in scenery. So we figured if we were going to get new jobs, we might as well do it right and get new jobs in a new city.

Hubby initiated this endeavor by looking for new jobs long before the wedding took place. Although we were not quite ready for a move until the wedding was over with, we were anxious to put this move in motion soon after we were married.

By now, it’s no surprise that we love Colorado, seeing how we had our fabulous woodland wedding in Breckenridge. Thus, it was one of our top destinations for a relocation, along with Portland, Oregon.

Hubby lived in Portland for several months for a temporary job assignment and we had also taken a short visit to Portland, with the intent of me getting acquainted with Portland in case we wanted to move there.

Pie and me in Portland, Oregon in June 2012. We embraced the rainy weather!

It ended up being an unspoken decision that we would try to relocate to Denver. Although we both adored Portland’s vibe and would have loved a complete change in scenery from the deserty landscape of Albuquerque, one of our main objectives to moving was to move closer to family, not further away. Since almost all of hubby’s family that we keep in contact with lives in the Denver area and we love Colorado’s outdoor scene, it was a no-brainer that we would move to Denver.

The Monday after our Breckenridge wedding, hubby had three interviews scheduled in Denver. It felt like an eternity waiting for responses after the interviews, but eventually we found out that hubby was offered a job from one of the three companies he interviewed for. Only a few weeks after our new titles of Mr. and Mrs. and we had our first big married decision to make together!

Hubby had a good impression of the company and was ready to jump and leave his stressful old job behind. I, on the other hand, while eager to leave my old job as well, started to feel uncertain if we were making the right choice by moving so soon after the wedding.

We ended up making a compromise and decided that hubby would take the job and move October 1st after giving his current company four weeks notice, while I would wait and move two months later over Thanksgiving weekend.

We weren’t thrilled to start off our new marriage being seven hours apart for two months, but we had to take into consideration that I would not be able to find a job in Denver as quickly as hubby and definitely not from a distance, as he had. Delaying my move to Denver would help us to save up a little more money from my current job before I became jobless for an unknown amount of time. I also wanted to have an extended weekend to move over, without hubby having to request off time from work right after starting his new job.

Hubby stayed with relatives in Denver and on his free time found us an apartment to rent once we both were in Denver together. We knew we would not have room for our household items in an apartment, so hubby also spent his free time making weekend trips back to Albuquerque to get several loads of our furniture and household goods that we were going to keep in a storage unit in Denver. 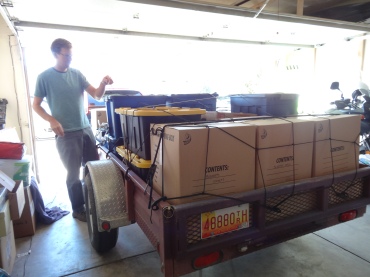 The two months apart crept along slowly, but finally Thanksgiving weekend had come and it was time to pack up and go! I had used almost all of my free time to organize all our belongings into boxes and be ready for the last and biggest load to move to Denver.

One of the most challenging parts about our relocation was the fact that we were going from living in a large house to living in a small, one-bedroom apartment. This meant that we had to take extra consideration into how we packed our belongings; what would be important enough to keep in the apartment and what could be stored away in storage. All of our stuff had to be packed separately so that we could easily unload everything that needed to go in the apartment at once and then unload everything else in the storage unit. We also had to make sure to label everything in detail so that we could find it later in case we needed it during the year or so we would be in the apartment. 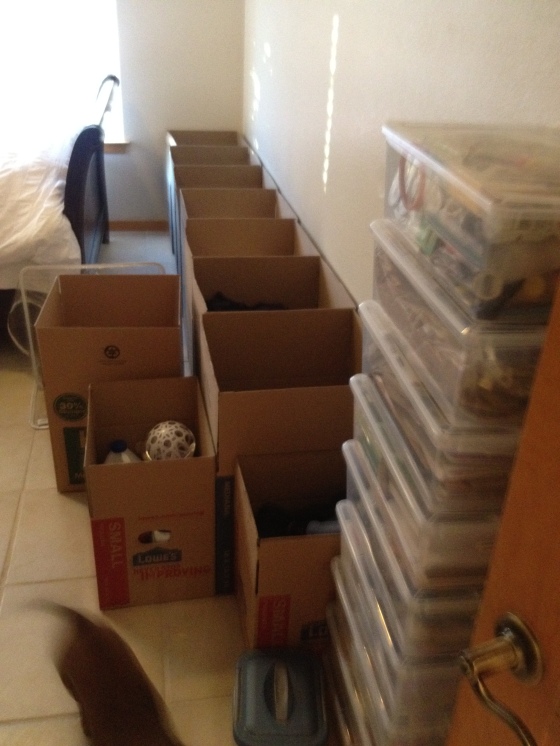 Our guest bedroom, filled with boxes of shenanigans to move.

Saturday morning after Thanksgiving we woke up super early and starting hauling butt to get packed, clean the house, and meet with the realtor to tie up a few last things to put the house on the market.

We had set an ambitious goal to leave by 10am and, surprisingly, ended up right on target. We had a long day ahead of us and expected it to take at least eight hours to get to Denver with hubby driving the large moving truck and me following behind with one of the vehicles.

What we didn’t expect was an extra hour of traffic outside Colorado Springs that ended up putting us in Denver at 7:30pm. Originally I had been so anxious to see the new apartment that I didn’t care what time we arrived or if we had to sleep on the floor of our new apartment, but after nine hours of driving, no possibility of moving a truck load of furniture and shenanigans in the cold and dark of night by ourselves, and no where to park a large truck by our apartments, we ended taking up our relative’s very generous offer to stay the night at their place.

At the butt crack of dawn the next morning, we were ready to go again and unpack all our belongings with the help of a relative and a friend. We couldn’t wait to fill our new apartment and start our new life in Denver! 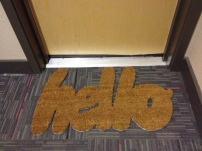 Our apartment all filled up!

Even the dogs have their own nook in the apartment!

Our bedroom. Such a tight squeeze!

The balcony and some pee turf for the pups! 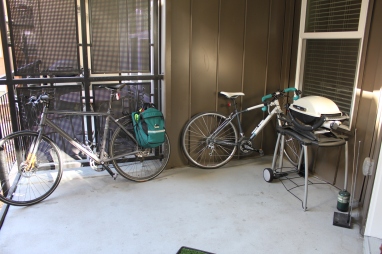 Plenty of room for our bikes and a grill on the balcony. Maybe in the summer we’ll get a small patio set. 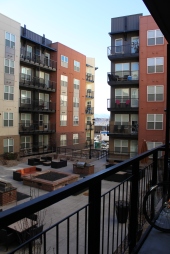 The view from our balcony on a clear day. This view is towards the west so we can see the foothills of Denver.

The view from our balcony on a snowy day!

View of the west from our apartment rooftop.

Rooftop view towards the north. That’s downtown Denver 6 miles away!

Rooftop view towards the north on a snowy night. You can just barely see downtown Denver.

Being jobless in Denver since December has given me a lot of time to do some things I love to do but never have time for, namely, crafting!!! In my next post, I’ll detail how I made our “hello” door mat for our new apartment.