By Saturday, our vacay was winding down and we were running out of activities to do that didn’t involve being disappointed by the continuous rain and wind. 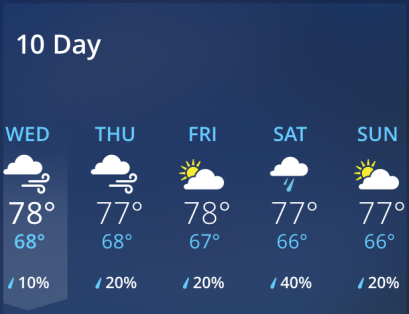 We slept in late and decided we would head to the Princeville Resort, which was not far from our rental property on the north shore of Kauai. A few days prior while snorkeling at Tunnels Beach, we were talking to another couple on the beach and I mentioned how eager I was to snorkel with a sea turtle on our trip. I sobbed about how we overheard tourists encountering them at practically all the beaches, but between the bad weather and our limited opportunities to snorkel or perhaps just pure bad luck, I had yet to see one! The couple bragged that they had seen a ton of them the day before at a “hidden” beach just a few miles away in the Princeville Resort.

Although the weather that Saturday morning was especially foggy and rainy, I insisted we find this mysterious and amazing Hideaway Beach because I was desperate for the opportunity to see a sea turtle on our trip and we were surely running out of opportunities with only a few days left in Hawaii.

We stalled as much as we could waiting for the weather to clear up — I ate some Lappert’s ice cream, we shopped for snacks from the grocery store, we sat in the car eating those snacks, we sat in the car playing Words with Friends, and we even got a round of drinks at a fancy bar in the resort. Eventually we gave up and decided we would just go to this beach, rain or shine! 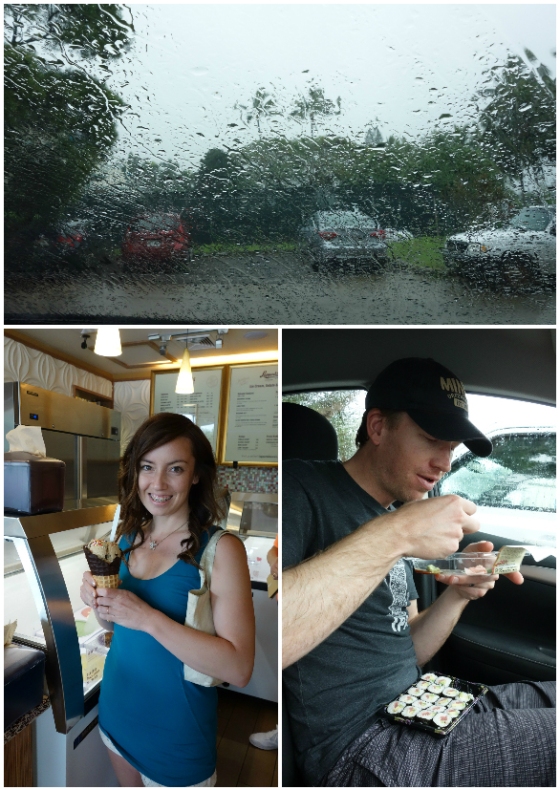 Just as our snorkeling adventure in the rain at Lawai Beach ended up being worth it, so was this one! The trail hung high above the ocean with gorgeous views of the foggy tip of the Na Pali Coast and a unique view of the beach’s reef and clear blue water just before we climbed down to it. 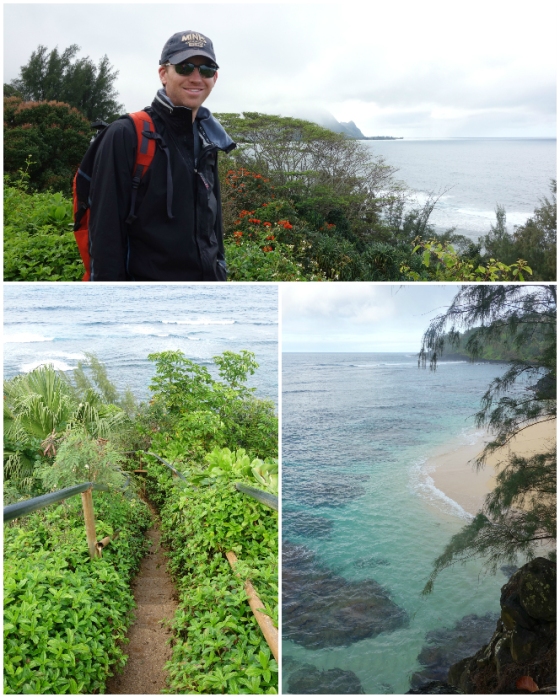 The water appeared to be relatively calm before we got to the beach, but I was feeling less and less confident once we were actually close to it. There was another couple snorkeling out in the water, so we both assured ourselves that it must be fine for snorkeling! We put on our snorkel gear and headed out! 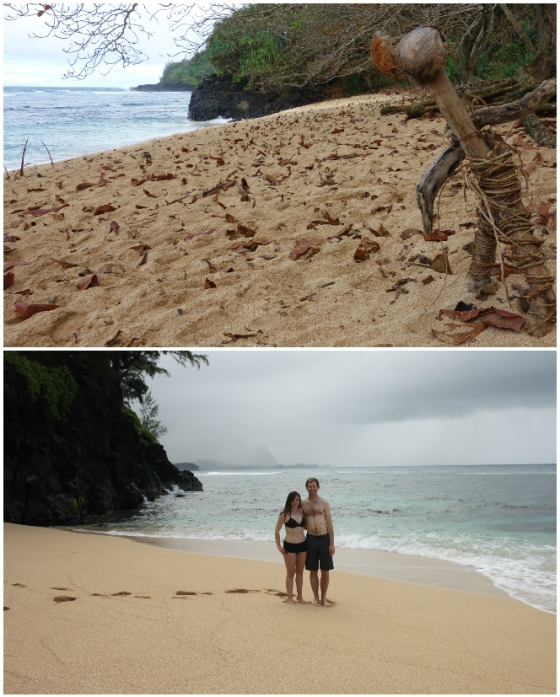 Before going to Hawaii, I had only snorkeled once in Costa Rica and we were never close to the reef there, so I was clueless about its dangers. The first thing hubby casually warned me about in Hawaii was how painful coral cuts could be. This little piece of advice early on in our trip made me fearful of snorkeling from day one!

We barely got a few feet out into the ocean before I began feeling uneasy. The tide was very low at this beach, which caused us to be very close to the reef. Even the small waves and ocean swells at this beach brought us mere inches from the coral. As we swam out, hubby led the way through what seemed like a narrow tunnel surrounded by coral on both sides. I wondered how we would turn around if we hit a “dead end” where the reef was too close to the water’s surface for us to go any further.

I began feeling even more panicked when I realized that hubby and I had not discussed a game plan for how I could let him know when I wanted to head back. I tried my hardest to keep calm and hoped that I would feel more comfortable in the water if I gave it time, but I was feeling worse each second as I continued to follow behind him.

We finally came to a small open area in the reef, but there was no room to stand up without hitting reef, so I did the only thing I could, which was to point back to the beach to try to signal to hubby that I wanted to go back. I had a strong feeling that hubby would have no clue what I was actually trying to indicate. Indeed, he thought I was trying to point out a sea turtle (which unfortunately there weren’t any of at all!) or some cool fish, so he looked around, saw nothing, and merrily continued on his way!

After this, I went into full panic mode! He was swimming even further out and I didn’t want to follow him, but I also didn’t feel comfortable heading back on my own, but I also had no way of communicating with him. I was having what felt like a heart attack under water as my chest tightened and my breathing levels spiked like I was doing a 100-m sprint. In sheer desperation, as hubby sway away, I clawed the heck out of his legs to try to get his attention again. We were in a slightly more open reef area now, so I poked my head above water to exclaim to hubby that we had to turn back.

Putting my head back under water in order to swim back to the beach was one of the hardest things I have ever had to do. I couldn’t catch my breath, especially through a small snorkeling tube, and my heart was beating a million miles a minute. I couldn’t decide what was better — reaching land the day before after being sea sick on a boat for seven hours or reaching land this day after having a 10-minute panic attack under water. 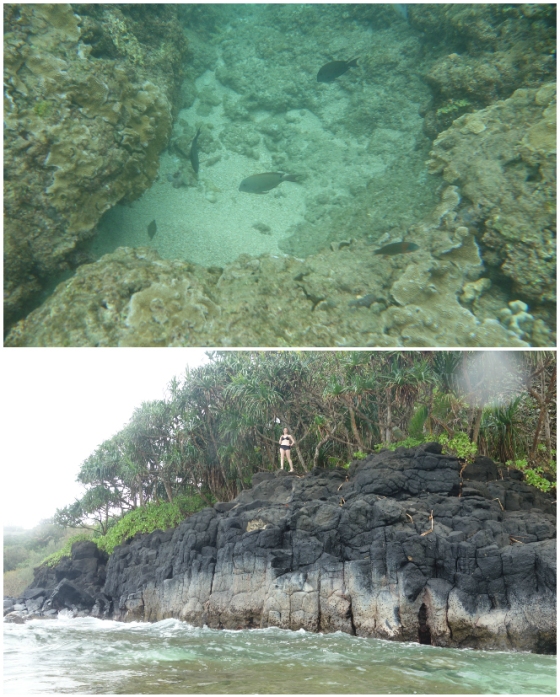 Hubby continued snorkeling, while I watched from one of the cliffs above. Strangely enough, from above, the water again looked so calm and non-threatening. I wouldn’t be fooled into going out again though!

Back at the beach, hubby doodled my name in the sand while I stalked a crab. The wind, fog, and drizzly rain never let up and we never did spot any sea turtles, so it wasn’t long before we headed back up the muddy, wet trail. 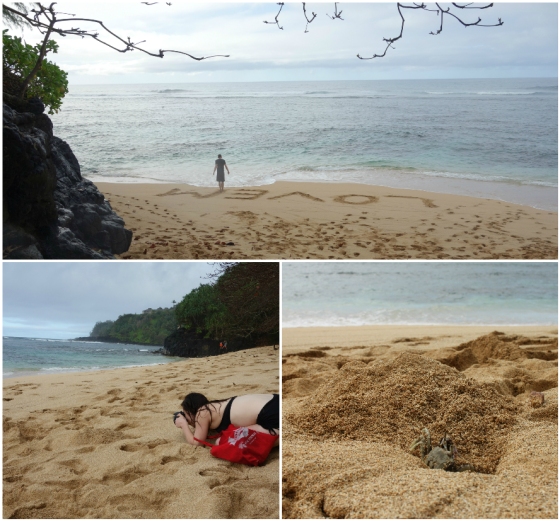 The rest of the day was spent with an uneventful but relaxing time at Tunnels Beach, watching the sunset and I was just fine with this “boring” end to the day after a tiring day at Hideaway Beach. 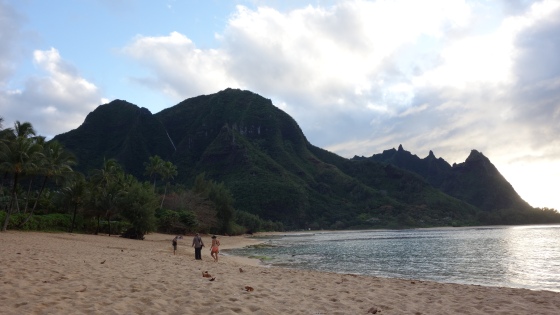 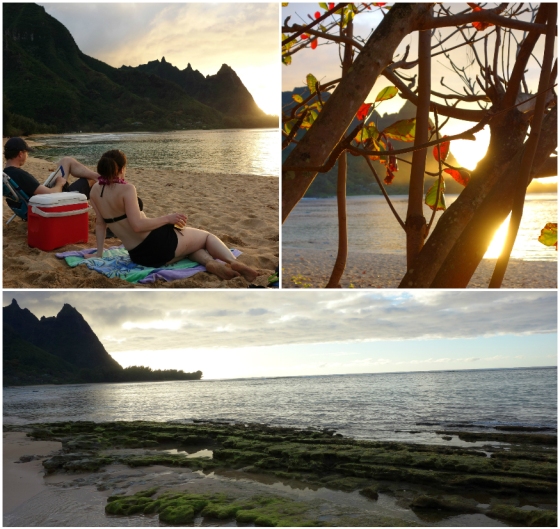 Up next: We go a fancy brunch and endure a windy walk along the beach.