It’s been three amazing years since Pie and I tied the knot and for our anniversary, we were fortunate enough to be able to get up to Breckenridge for a quick celebratory weekend trip. We took the obligatory photo in our favorite field, but then we had to decide what else we would do in Breckenridge.

To refresh your memory, Pie and I have been back to this meadow in Breckenridge every anniversary.

I know that our marriage is still relatively young, but I can still say with certainty that Pie and I have what feels like the perfect relationship. I know that the main reason our relationship is so great is because Pie is such a caring, selfless, and loving person, but I also believe that one of the reasons our relationship has been so easy is because we are so similar. That saying that “opposites attract” surely must be a poor excuse for some couples that aren’t meant to be together to pretend they belong together because I can’t imagine having a relationship any other way!

I love that Pie and I have so much in common from our attitudes to our hobbies. Not a day goes by that I don’t forget how fortunate I am to share my life with someone that enjoys physical activity and being outdoors as much as me. I believe it’s an important part in helping us grow together as a couple instead of growing apart and developing separate lives.

It’s no surprise that when I suggested we climb a 14er outside Breckenridge that Pie was all in! Quandary Peak was the perfect choice because not only is the drive to the trailhead less than 30 minutes from Breckenridge, but it’s also class 1 (14ers are ranked from class 1 to 4, with class 1 being the easiest).

We woke up at 5 am and we were at the trailhead by 6 am, with the sun not quite fully up yet. While the parking lot proved that there were already plenty of enthusiastic hikers out on the trail, we actually didn’t see many hikers until we reached the edge of the tree line (the area where trees can grow; beyond this elevation, environmental conditions make it difficult for trees to grow). 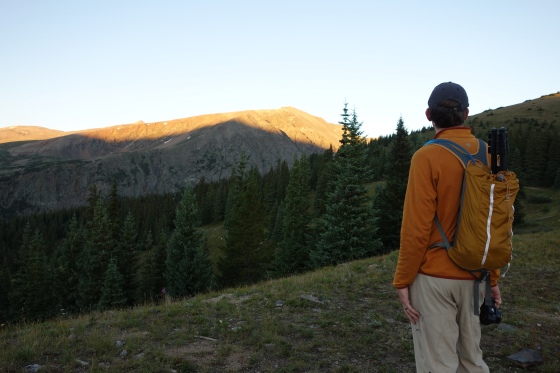 This 14er wasted no time getting up to a climb, which was actually a good thing. Unlike the two previous 14ers Pie and I have climbed together – Mount Bierstadt and Grays Peak  – we wouldn’t be wasting precious mileage on flat trail. In fact, it wasn’t long before we started to reach some open areas above the trees and could see the sun’s rays touching a peak across from us.

When the trail eventually turned from dirt and grass to rocks, we were pleasantly surprised that the trail transformed into big rocks conveniently piled up like stairs. This made hiking the steep trail incredibly easy, especially compared to Grays Peak, which had lots of loose rocks and shifty dirt at the higher elevation. Although the rock stairs didn’t continue the entire way up to Quandary Peak, the footing was much more stable on this trail compared to the other 14ers we had done. 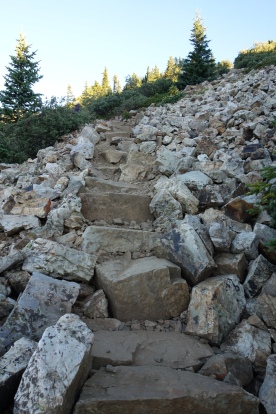 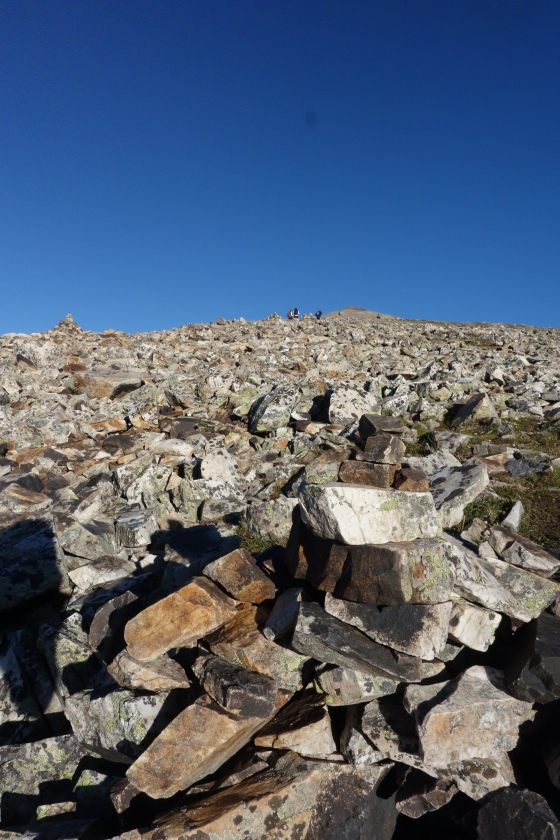 Soon after we left tree line we had to say goodbye to the cool, shaded trail, but we had finally reached a section of the trail where we could see an end in sight… and it looked like an eternity away! 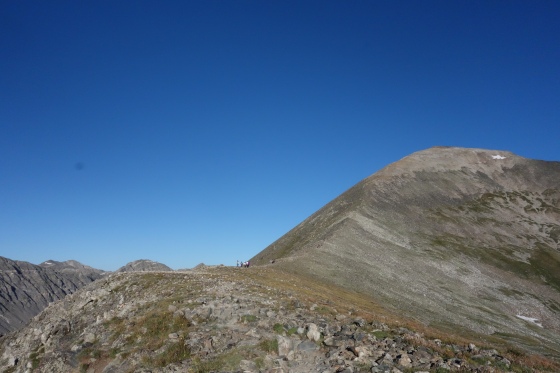 Fortunately, it wasn’t actually an eternity away and despite the fact that I am currently not in the best physical shape that I’m usually in, the final climb from this flat section to the peak was fairly painless. In fact, it was much more painless than the other two 14ers we had previously done and we didn’t even need a single break from the start of the trailhead to the peak. Perhaps it was an easier 14er or perhaps it was just easier now that I knew what to expect on a 14er. Who knows!

Also fortunate was that this particular peak seemed somewhat less chilly and windy than the others, which allowed us to enjoy our much-needed breakfast without having to wear gloves and a ton of layers. 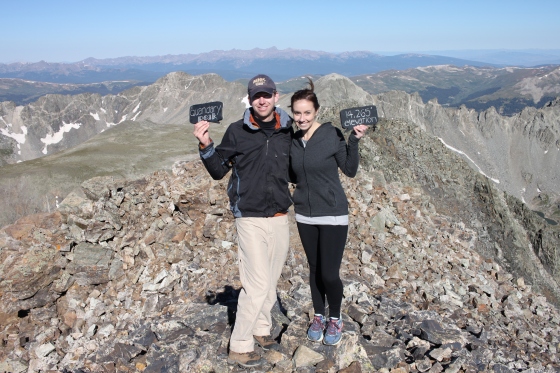 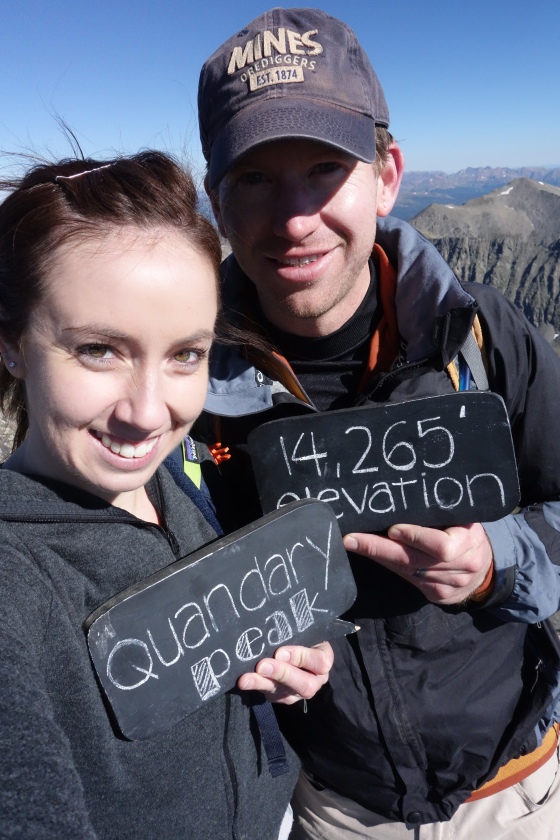 We had reached the peak around 8:30 am and when we had first arrived, there was probably about 20 or so people at the top. An hour later, when we were done taking a million photos and eating our breakfast, we headed down and noticed there was easily 50 people gathered on the peak. I was glad that we hadn’t started our hike any later than 6 am (which we had already considered to be a relatively late start). 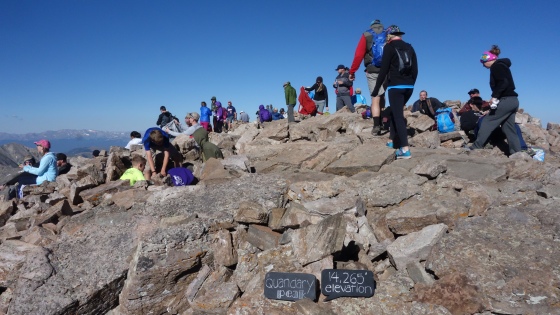 Another reason we were glad for our early start was the sun! On most 14ers, the biggest concern for getting an early start and getting down quickly are dangerous afternoon storms. We had the opposite to worry about on this day because it was still early morning and the only clouds in the sky were hovering over mountain ranges in the far distance. Hiking down was hot for us, so the throngs of people hiking up while we were hiking down surely must have been roasting in that morning sun! 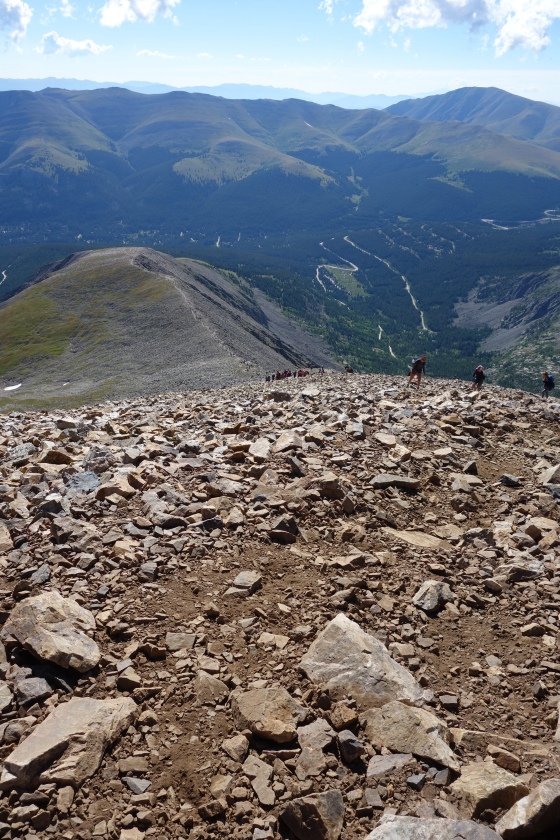 On our hike down, I commented to Pie how disappointed I was that we hadn’t seen but one goat on our hike and he was too far away to get a photo of when we spotted him. I told Pie that not only did I want to see a goat, but I [selfishly] wanted to see a baby goat (who doesn’t love baby animals?!).

Not even ten minutes after making this comment, we encountered a goat that was just a few feet off the trail. He was so close to the trail that when we finished taking photos and walked past him, he decided to walk on over to the trail itself to continue eating his breakfast there. 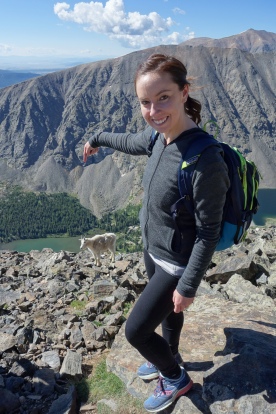 And not even 10 minutes after THAT goat encounter we ran into… you guessed it…a BABY FREAKING GOAT! Him and momma goat were literally and nonchalantly hanging off the side of the mountain. Cutest sight ever! 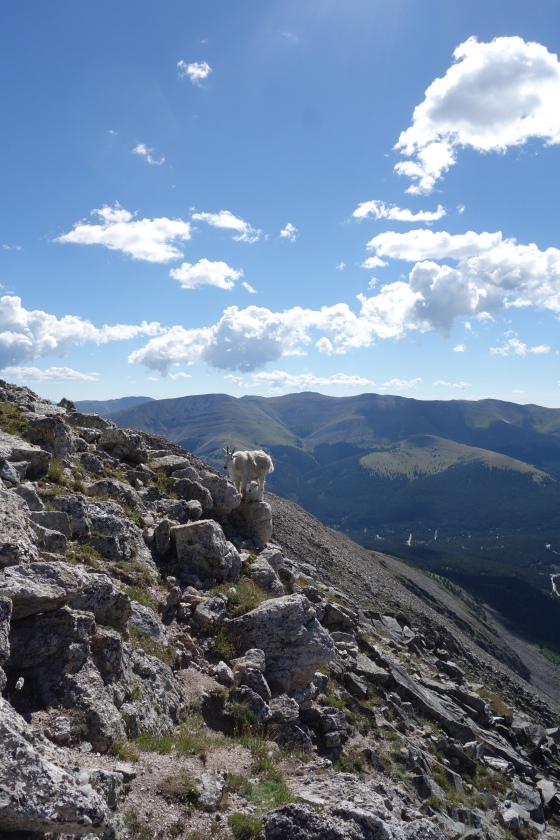 The rest of the hike down was uneventful and long. It was no surprise that hiking down was more unpleasant than hiking up because we had to avoid the hundreds of people getting a late start hiking up the mountain. The hike up had taken us two and half hours, but the hike down ended up not being much quicker at two hours and 15 minutes. This was due to the fact that we hadn’t taken any breaks hiking up, but on the way down we took two long breaks to ogle over the goats. Totally worth every arduous step!