Admittedly, DIYing the cabinet hardware in our kitchen and bathrooms was one of the small projects I was most nervous about, and at the same time one of the things hubby was least nervous about. In my mind, it felt very scary to drill holes in our cabinets and possibly make a mistake that could not be easily fixed. On the other hand, we scoffed at the $600 quote from the builder to purchase and install of cabinet hardware.

But who was I kidding!? This was the perfect project for hubby since he loves anything that involves measuring, punching numbers, and using a drill!

After looking at the “display kitchens” at IKEA, we decided we liked the mixture of doing knobs for the cabinets that opened sideways and pulls for the drawers and the cabinets that opened outward. We purchased knobs from IKEA and pulls from Lowe’s (IKEA had similar pulls to what we purchased from Lowe’s, but the Lowe’s version seemed to be of better quality). We also purchased an IKEA FIXA drilling template that had a grid of small holes in it and was helpful for some of the knobs we needed to install, but was not as helpful for the pulls. We could have definitely done without this template/aligner as it was mostly just a shortcut for taking the time to measure the same placement of where the pull/knob should go on each cabinet, but it was super cheap at only $3! One last minute thing we needed for the project was longer screws than what came with the hardware. These were easy to find at Lowe’s.

The hardware install was done completely by hubby within a few hours. He measured where each knob/pull should go and then drilled a small hole (smaller than the actual screw) to get the hole started. The final step was manually screwing in all the screws to the pulls/knobs. It was as simple as that!

Total cost for this project was approximately $125 and a couple hours of husband labor! Definitely a DIY win!

Kitchen cabinet hardware: before and after 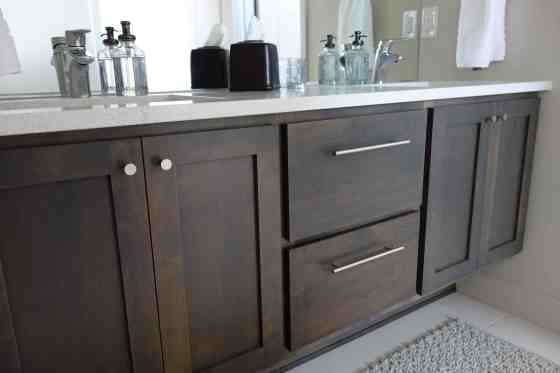