I had assumed we would wake up feeling unbearably sore and tired from our previous day’s kayak trip, so I hadn’t really thought about making plans to do anything this day except perhaps relax at the beach, but somehow, we were neither! But now we were not very tired and without plans.

I can count on one hand the number of things we did on this day:

Queen’s Beach was an attraction that hubby and I visited on our previous trip to Kaua’i. It is a shoreline of tall lava rock, with the “Queen’s Bath” part referring to several deep lava rock pools that fill with turquoise blue water that is momentarily calm between crashing waves. During our previous visit, the winter surf was too crazy to allow us to go into the pools, but I half-expected the water to be just as moody when we re-visited.

Our first attempt to visit Queen’s Bath in the late morning was a fail. The parking lot to Queen’s Bath is small and nestled in a residential area. If there isn’t an open parking space, visitors are supposed to leave and try again later. We didn’t know we were within walking distance to Queen’s Bath until we actually started driving to it, so when we arrived and there wasn’t parking, we gave up and ended up walking one sweaty mile to it later in the afternoon instead.

In addition to the one-mile walk to the parking lot, we had to walk about a quarter of mile on the steep trail through groves of hala trees to get to the shoreline. Luckily, all this walking wasn’t for naught, as the water was indeed better than what we had witnessed last year.

Queen’s Bath is a popular tourist attraction, and apparently even more popular in the summer, so there were lots of young people, including both tourists and locals, jumping in the deeper tide pools that led out to the ocean. We followed suit and found a pool further away from the crowds that had a short lava rock ledge we could jump from. We didn’t get to play in the water long before we had to venture back for our dinner reservations at Bar Acuda in Hanalei. 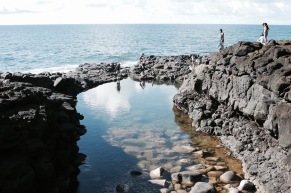 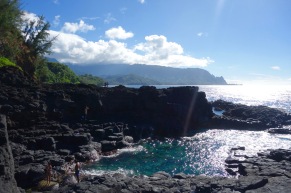 At Bar Acuda, we feasted on several tapas and fancy cocktails and officially celebrated our accomplishment from the previous day of completing the 17-mile kayak trip. 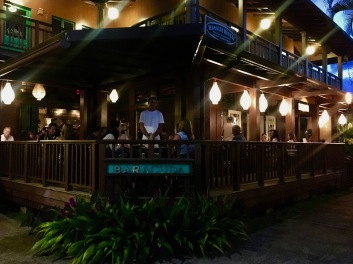 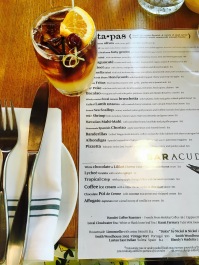 Next up: Snorkeling at the famous Tunnel’s Beach.