Fun fact: August 17th of our trip was actually hubby’s and my fourth year wedding anniversary. We were sharing our Hawaii trip with my brother and it felt kind of weird celebrating that day with him around, so after my brother had left, we were ready to pop the bubbly! Oh wait, we had already done that every morning with mimosas.

Hubby had found some really unique, fun pineapple wine for me on Maui and I gave him a cute pineapple-themed card with sand in it that I had made before the trip, so I think it’s safe to say we had the “fruit anniversary” aptly covered.

Our first activity of the day was visiting Hideaway Beach. Hideaway Beach was one of the only sandy beaches close to our condo. Our condo had great views, but below us was lots of steep, lava rock cliffs.

Hideaway Beach was yet another place we had visited during our winter Kaua’i trip that ended being a “fail.” I had panicked big time trying to snorkel above the reef at this beach and realized that I just wasn’t comfortable at all being that close to the reef with crazy waves.

Even though we had had a successful day snorkeling at Tunnels Beach the day before, I was worried that the reef at Hideaway Beach would still be too close for comfort. So I brought Mingo just in case as Plan B. Surely he wouldn’t mind getting dinged by sharp reef, right?

Did you think I was kidding when I said Mingo came everywhere?

The thin, landscaped walk down to Hideaway Beach was steep, but worth the views. Even more so, it was definitely worth the amazing turquoise blue and reef-outlined waters that awaited us at the end. 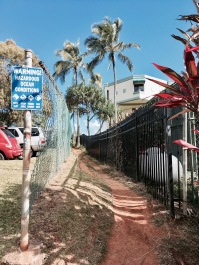 Unlike in the winter when we had practically had the beach to ourselves, this beach was quite crowded in the summer. Apparently it was neither hidden enough or steep enough for tourists not to flock there.

But it didn’t matter to us. Hubby and I pretended we were on vacation by ourselves and enjoyed our time fully at this beach. I didn’t snorkel for very long because I didn’t want to end up with another day-long snorkel mask tattoo on my forehead, but the snorkeling here ended up being just fine for my comfort level. We had probably seen much more fish at Tunnels Beach the day before anyway.

On our way back up the steep trail, I was smitten, as hubby offered to haul out my sexy, girly Mingo so I could hold on to the railing and ropes more easily. I was walking behind two cute things and I don’t know how it gets any better than that on your make-up wedding anniversary day!

After our Hideaway Beach excursion, we had an uneventful lunch at a different (and un-swimmable) beach with sushi we had picked up from the popular Sushi Girl take-out restaurant down the road.

Next, we headed to Queen’s Bath again because I felt like we didn’t get to spend much time here the other day when we had visited right before our dinner reservations. I was soooooo glad we had decided to go again, because our afternoon visit this time was accompanied by so many sea turtles that I lost count!

I had been excited when we first walked down the path and spotted a turtle in the water from far away, not knowing that we would see many more. They were everywhere in the tide pools that were “open” to the ocean, and even though they were being knocked up against the lava rock ledges with every rough wave, they didn’t seem to care! We figured they must have been trying to eat algae off the sides of the lava rock because they seemed to like hanging around the ledges of the lava rock cliffs instead of just floating in the middle of the water. 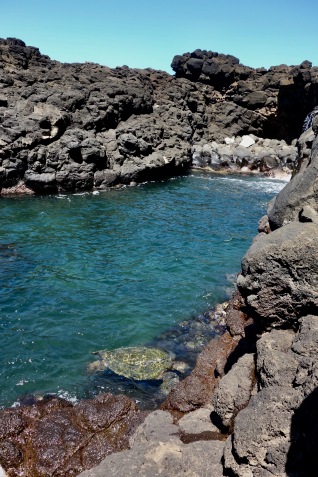 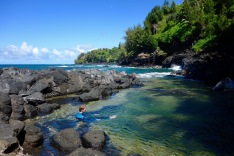 Eventually, I pulled myself away from gawking at the sea turtles and decided to jump in the water. . . literally. Apparently we had come during what appeared to be a particularly busy time at Queen’s Bath, as a bunch of tourists and locals were jumping in one of the deep pools open to the ocean.

The crowds were actually helpful since I was able to watch everyone jumping off the ledges and figure out exactly how they were getting back out of the water. The waves crashing against the slippery rock made it look challenging, if not impossible to get out, but if you knew just the right spot or timed it just right with a swell, you could get out very easily.

I did a few jumps thinking I was oh-so-brave and cool, only for hubby to inform me that maybe I shouldn’t be cannon-balling into the water. That was lame and all the cool kids weren’t doing this. They also weren’t holding their noses as they jumped in the water either, but I refused to give in on that one. Even holding my nose as I jumped in the water resulted in a salty nostril!

After a few jumps, I decided to try to get out of the water on the other side of the cliff from where I was originally jumping, since this other ledge seemed more fun to jump from. This resulted in a series of very embarrassing attempts to get out until a young guy in the water nearby felt pity on me and showed me the “trick”.

Once I was out, I was finally standing among the other cool kids. Ye-ahhh! I felt a momentary rush of excitement and pride, but then quickly realized how out of place I was with my un-tanned body and the fact that these kids were all talking about what flip they were going to do next in the water, while I was just contemplating whether I would hold my nose or not to try to pass as somewhat cool. So I jumped in and got that shame show over with pronto! We had fancy, adult dinner reservations to get to anyway.

Hubby and I celebrated our belated wedding anniversary that night with a dinner at a nice restaurant about 40 minutes away from our condo, called Oasis.

We had made sure to save enough room for dessert because across the street was Street Burger, the place we had dined at the night before that had amazing dessert we didn’t have room for. Their s’mores cup dessert was to die for! 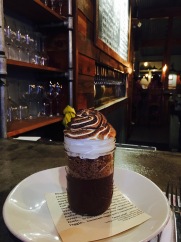 Next up: We see the Na’Pali Coast from a dangerous cliff!