After our epic backpacking adventure in Waipi’o Valley and Waimanu Valley on the north side of the Big Island, we weren’t sore or even very tired… just downright dirty and eager to get back to civilization to take a shower!!

We had decided to split our 10-day vacay on the Big Island between the dry west side and lush east side, with our backpacking trip in between. Up next was our visit to the east side of the island!

We had to choose between staying in Hilo or Volcano Village on the east side. From briefly reading travel forums, both towns seemed to be small and quaint with an authentic Hawaiian vibe to them. The only major difference was that Volcano Village was obviously closer to Volcanoes National Park. We weren’t necessarily planning to spend a significant amount of time in the national park, so we chose a city based on which Airbnb we liked the best.

With the east side of the island having fewer beaches than the west side, it was difficult to find ocean-side lodging, but we ended up finding an adorable cottage in Volcano Village that was tucked away in a lush jungle. We wouldn’t have the sounds of the ocean to put us to sleep at this Airbnb, but we weren’t going to miss it because we were looking forward to a change in scenery and noise with this peaceful retreat!

On our drive from Waipi’o Valley to Volcano Village, we traveled through the town of Hilo, but because we still smelled and looked like feral Hawaiian pigs, we had to pass up on several tempting options for happy hour and an early dinner.

Once we arrived in Volcano Village, one of the things we found out right away was that it was much smaller and had fewer options for restaurants and stores compared to Hilo. In fact, there were literally only a handful of restaurants to choose from.

After we showered, we eventually settled on dinner at the Kilauea Lodge, which seemed to be the best rated and classiest restaurant in town. We naively showed up without reservations, not even considering the fact that in a town with only five restaurants, walking into the nicest one without reservations was really brazen of us. Luckily they were able to seat us anyway and we thoroughly enjoyed our feast and amazing cocktails that looked nothing like what we had the past three days during our backpacking trip. 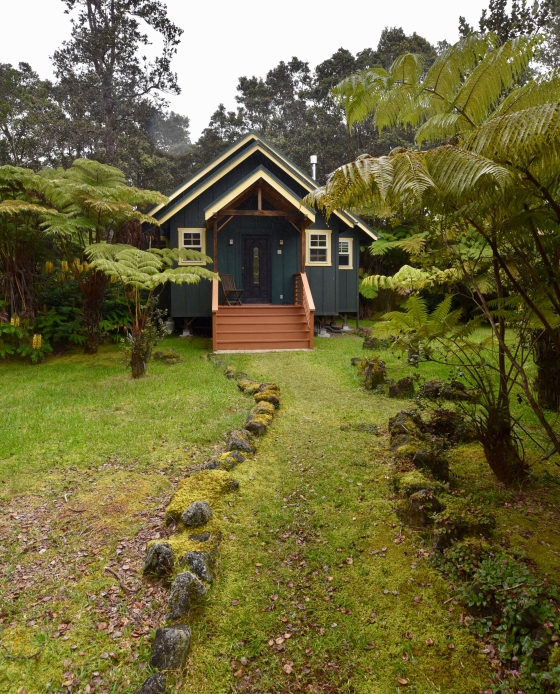 The backyard of our Volcano cottage included a hot tub tucked away in the trees, a welcome sight after our rough backpacking trip!

Our Big Island vacay fell over our 6-year wedding anniversary. After we cleaned up from our backpacking trip, we took a belated pic to remember the special date.

On our first day, we decided to visit Punalu’u Beach, which was only 40 minutes south of Volcano Village. Punalu’u Beach was known for its black sand and sea turtles that often rested up on the beach. It also didn’t require a hike to get to and supposedly wasn’t too crowded.

Our day at Punalu’u Beach was exactly the kind of day we needed after our backpacking trip. We pigged out on our to-go sandwiches, drank booze from a fresh coconut, and simply vegged out.

While we did indeed spot a few sea turtles camouflaged on the black lava rock and resting in the late evening sun, what we weren’t expecting to see were some unusual-looking waterfowl that we jokingly referred to as “beach chickens” (we later found out they are actually called Muscovy Ducks). It was fun watching these “beach chickens” make their rounds on the beach, invading everyone’s personal space and picking up errant food crumbs. 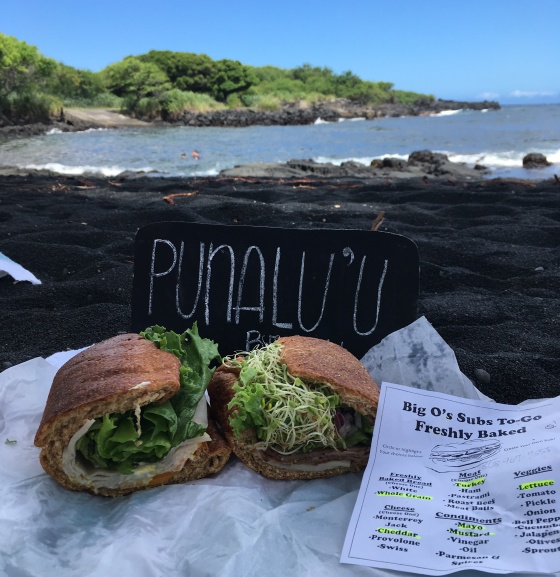 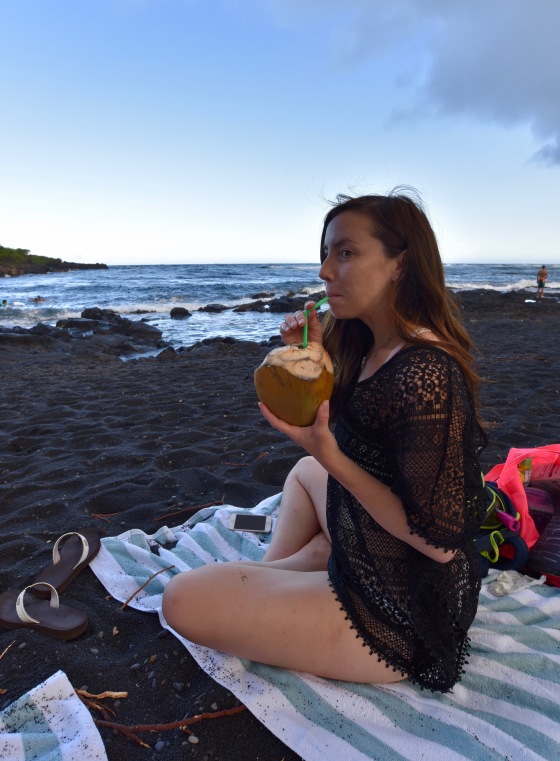 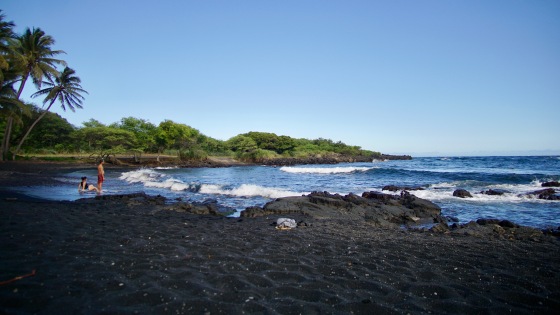 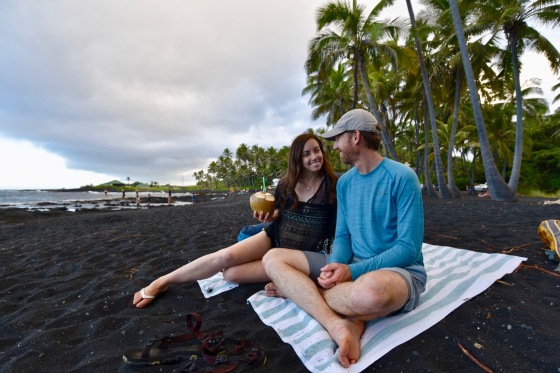 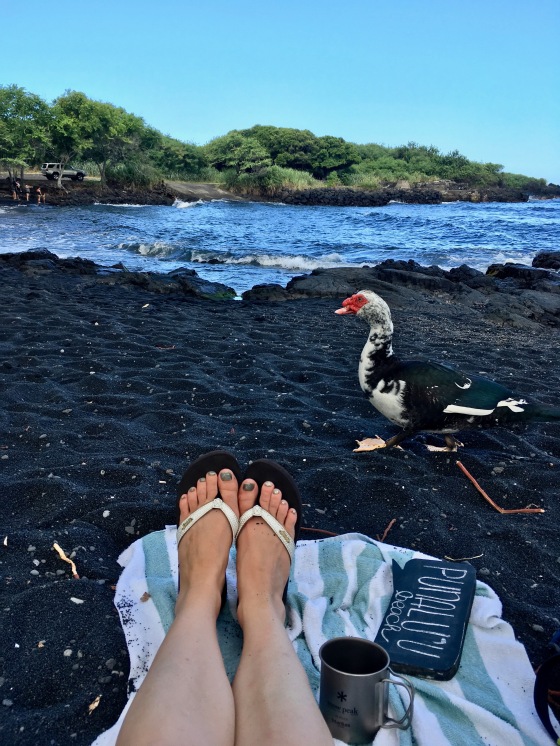 We spent the morning of our second day on the east side of the island doing the obligatory activity of visiting Volcanoes National Park. Call me crazy, but visiting the national park was one of the activities I least looked forward to on the island. Seeing active lava flow in person has always been one of my bucket list items and seeing recent photos of the 2018 eruption of the Kīlauea Volcano dumping red hot molten lava out into the ocean like a faucet was torture, but that recent lava flow had stopped well before our visit.

Not only was it a bummer that there was no active lava flow in the park, but one of the only other sights we had been excited to visit, the Thurston Lava Tube, was also closed due to safety concerns of unstable ground from the recent eruption.

With the whole island having lava rock landscape, nothing about the national park seemed like it would be special from what we had already seen on our road trips. Although this was obviously not true and certain sights in the park were fascinating, the park still didn’t seem to have the wow factor that others claimed.

Some visitors spend days visiting the park, but we whizzed through several of the sights labeled on the map and even made it to the end of the road in the park to see the Hōlei Sea Arch, all before mid-morning when the park became overcrowded with tourists. 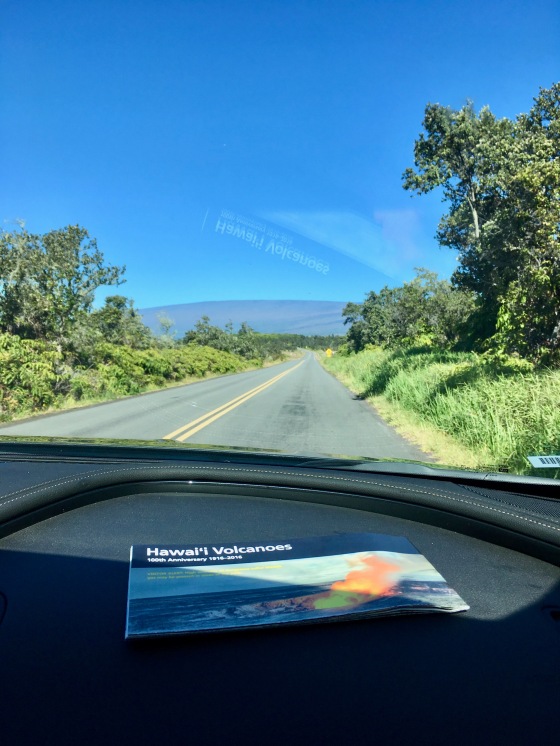 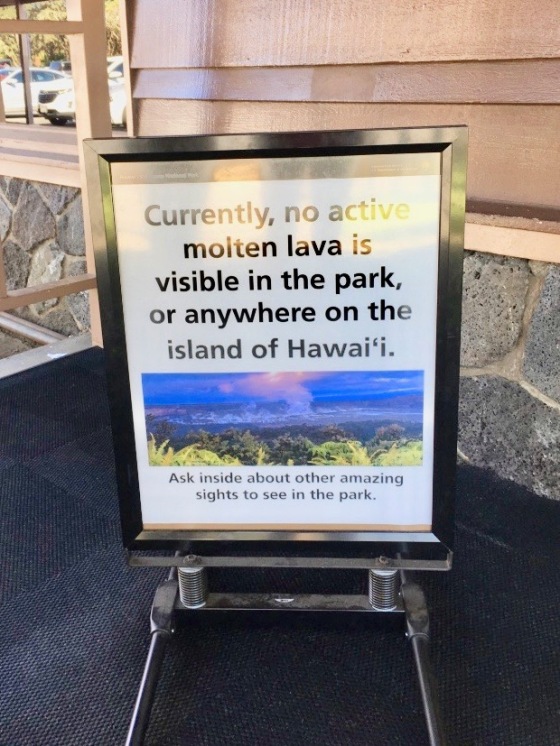 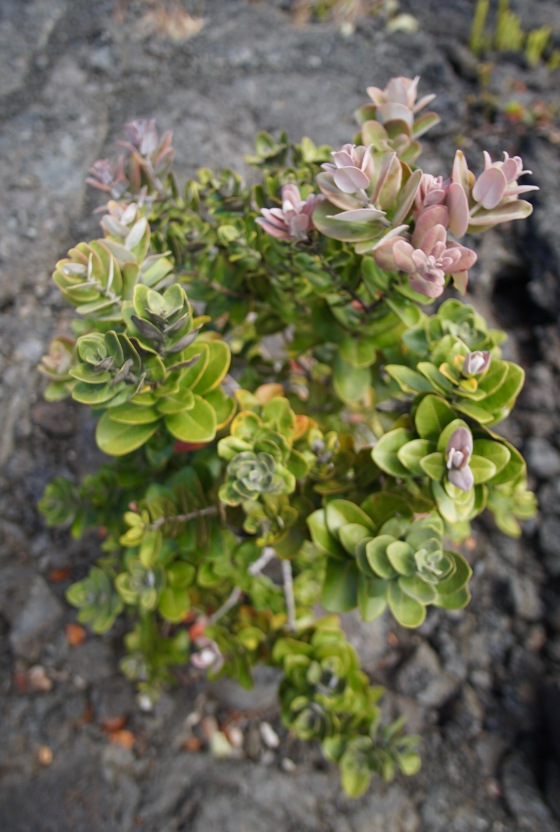 Even though the Thurston Lava Tube in Volcanoes National Park was closed, we were in luck because, as it turns out, the Big Island has several other lava tubes outside of the park. In fact, there was a more fascinating lava tube right near Hilo that we could check out called Kaumana Caves.

We planned ahead of time to bring headlights so we could explore deeper into the Kaumana Caves, but our wise planning was a complete waste when we found out once we were headed into the caves that one of our headlamps was on its last dying leg. It ended up being for the better though, since the caves were surprisingly tricky and slippery to walk on. We explored a bit in the caves and moved on to our next sight for the day.

The Big Island didn’t seem to have many waterfalls to visit, but there were two popular ones on the east side that each deserved a quick visit, including Rainbow Falls and ‘Akaka Falls. ‘Akaka Falls State Park had a short loop to walk to get to the main falls and was a surprisingly nice tourist sight, as it contained an overly lush tropical forest that made us feel we were in the movie Avatar.

On the way back to Hilo that evening, hubby decided to take a last-minute scenic detour advertised on the roadside off Highway 19. Happy hour at Pineapples Restaurant in Hilo awaited us, so I initially wasn’t too thrilled about hubby’s alternate route, but this little four-mile scenic detour (also referred to as the Old Mamalahoa Highway) ended up being a fantastic waste of an extra few minutes to our destination and was almost like a mini version of Maui’s Road to Hana. Although we didn’t make any stops along the road, small roadside waterfalls around each curve and large, lush trees draping the sides of the road made the route scenic enough without even stepping out of the car. 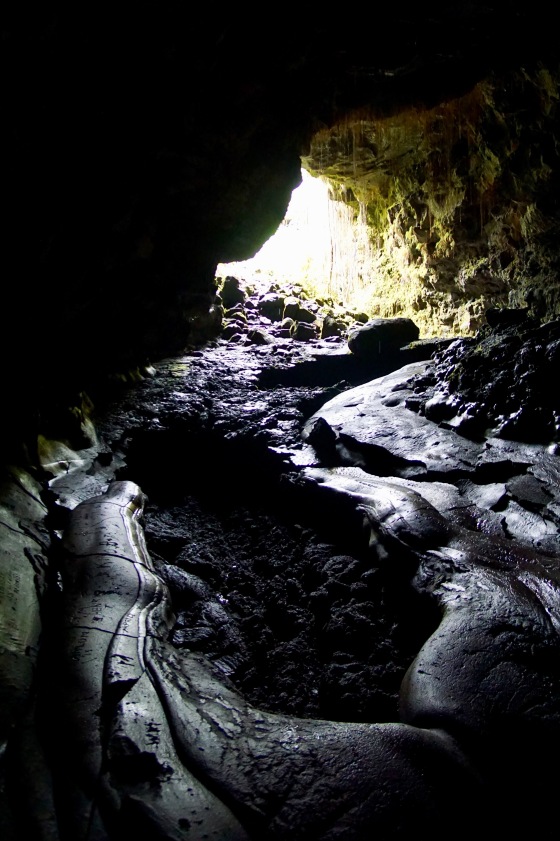 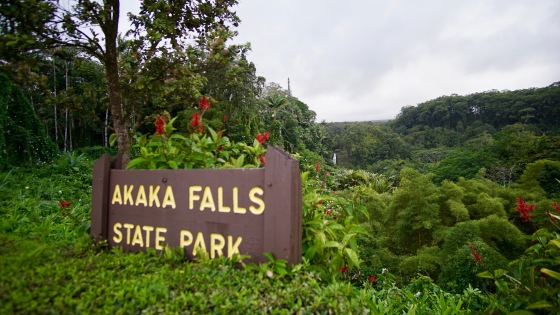 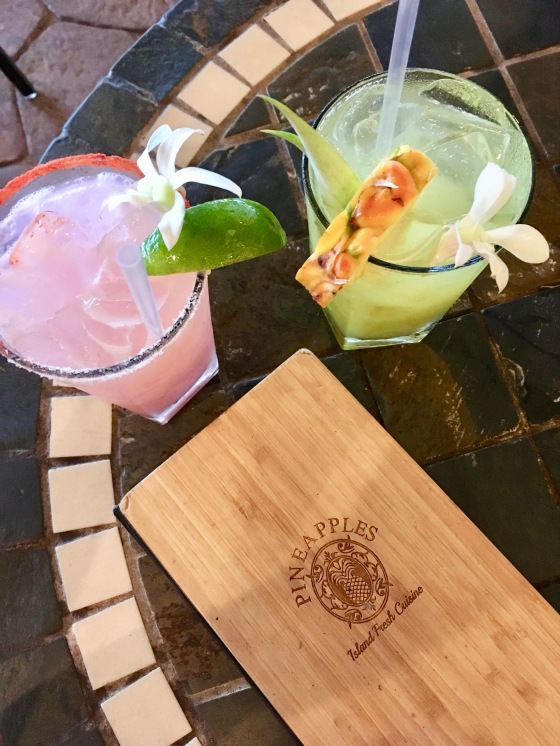 After only three short days on the east side, our time on the Big Island was already coming to a close. We hadn’t created much of an itinerary of activities during our trip, so on our last day, we didn’t feel like we had any major sights left to squeeze in.

During our entire trip, hubby just went with the flow on whatever activities I had picked out to do (crazy backpacking trip included!), but on our final day, before we hit the road back to Kona, he had one small stop he wanted to make: the Mauna Loa macadamia nut factory. Every time we visit Hawaii, hubby goes nuts for these nuts! Although these nuts are available on the mainland, in Hawaii you can get them in just about every flavor imaginable and they’re also obviously fresher. There wasn’t much to see on the factory grounds, but it was still fun see the tree farm where they were grown.

I also had one request before we headed back to Kona: ice cream for breakfast at Makani’s Magic Pineapple Shack in Hilo. We don’t have cookie monster-themed ice cream in Colorado, so this cute and silly treat was worth the long wait with 12 other teenagers in line. 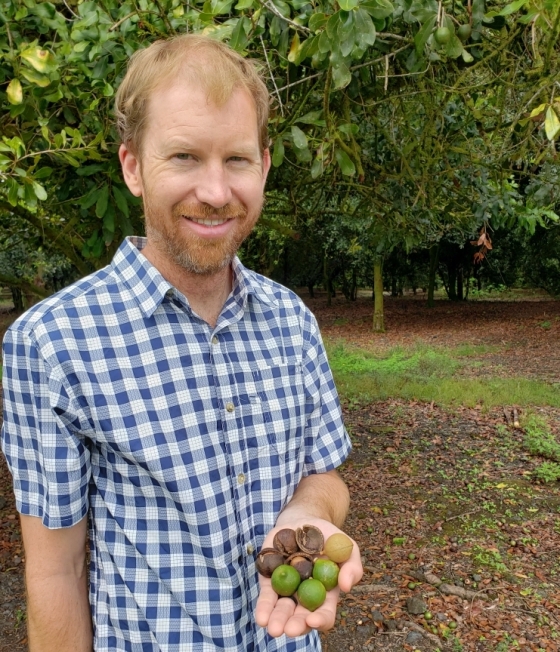 Once we were back on the Kona side of the island and our bellies were full from another great oceanside restaurant, we still had half a day to kill until our 8 pm flight. We had visited six beaches on our Big Island trip and, with the exception of Papakōlea Beach, none seemed ideal for swimming, either because of the lava rock or the rough surf… or both! On our last day, we were in search of a beach that would be swim-able and have easy access. This was a tall order, but we settled on Kukio Beach.

Kukio Beach was located beside the Four Seasons Resort on the west side of the island, so we figured it had to be a good beach! The first thing we noticed about the beach was that because it was located in the Four Seasons Resort, which required going through an intimidating guard station to get access to, it was not crowded at all! In fact, hubby and I were pretty much the only ones on the beach! The beach was also great because it had white sand, which was an unusual sight on the Big Island. I certainly appreciated being able to see more clearly in the water.

Unfortunately, even though reviewers of the beach claimed it was a calm beach and had non-rocky sections to get in the water, it ended up being neither of these things, so we didn’t do any swimming. Nonetheless, we enjoyed a quick, relaxing hour on the beach before hubby wanted to move on to his next idea: sneaking into one of the Four Seasons restaurants for happy hour.

Although the restaurants in the resort were probably not just for resort guests, it still felt like we were extremely out of place and I was certain they were going to sniff out our cheap Airbnb butts and kick us out immediately. This didn’t happen, but we still paid a [literal] hefty price for our last happy hour on the island.

After our ritzy happy hour, we headed to the Kona airport and witnessed one last Hawaiian sunset, which was the perfect goodbye for our Big Island trip. 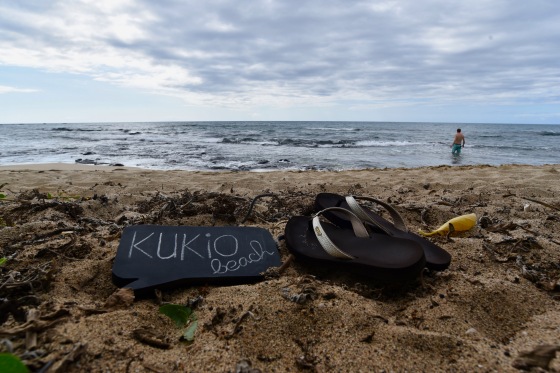 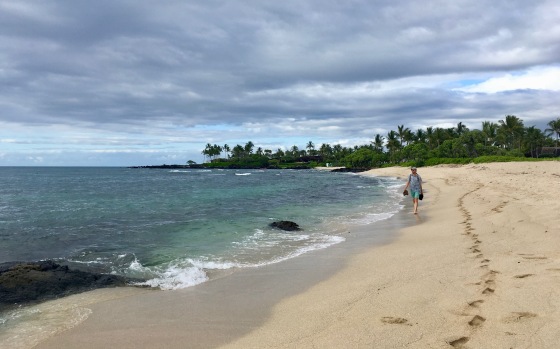 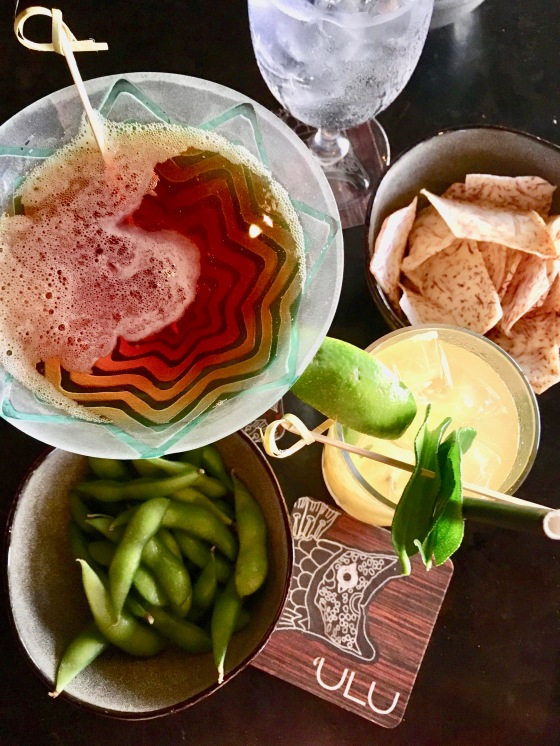